ROBERT E. HOWARD (1906 -1936) was a Texan author of Fantasy, Adventure, Horror, Science Fiction, Mystery and Detective Fiction. He is best known for the creation of Conan. Most of his stories tended towards Fantasy, Adventure or Horror, with recurrent themes like reincarnation, boxing, self-reliance, racial memory and racial pseudo-science. He was a student of history, with some of his short stories depicting events from history (but usually made fantastic). Even when his fiction was not meant to be historical it often used historical place names and historical character names to dress his fictional worlds. His many writings, written during his too short career, are today mostly in the public domain. This has meant, since they’ve mostly gone PD, a delightful flourishing of audiobook and audio drama releases. Listed below are all the R.E.H. audiobooks, podcasts, and audio dramas that we are aware of.

Bear Creek Collection Vol. 01
By Robert E. Howard; Read by RK Wilcox
10 Zipped MP3s or Podcast – Approx. 6.5 Hours [UNABRIDGED]
Publisher: LibriVox.org
Published: May 2008
Breckinridge Elkins is the roughest, toughest, fastest-shootin’, hardest-fightin’ feller in the Bear Creek settlement, and probably in the entire Humbolt Mountains. As he travels further from home, he single-handedly takes on outlaws, settles (and starts) feuds and tries his hand at romancing the girls. He also discovers a lot of strange customs among other folks, such as building houses out of boards and wearing clothes that ain’t buckskins. Set in Nevada during the late 1800’s, this collection of stories is a great rollicking romp through the American frontier as seen through the eyes of one of the most enjoyable characters created in the history of tall tales.

Gods of the North
By Robert E. Howard; Read by Rowdy Delaney
1 |MP3| – Approx. 21 Minutes [UNABRIDGED]
Publisher: LibriVox.org
Published: September 21st 2008
A winter war in the mountains of Vanaheim and a bit of gossamer are all that stand between Conan of Cimmeria and a frosty beauty who spurns him. First published in Fantasy Fan, March 1934. Alternate titles include: The Frost Giant’s Daughter, The Frost King’s Daughter.

Hour Of The Dragon
By Robert E. Howard; Read by Morgan Saletta
Podcast – [UNABRIDGED]
Podcast: Dragon Hour / The Hour of the Dragon
Podcaster: November 2008 – ????
Chapters 01 |MP3| Chapters 02 |MP3| Chapters 03 |MP3| Chapters 04 |MP3| Chapters 05 |MP3|
Follow Conan and his struggle to overcome the dark necromancy that has cast him from the throne he won! Quake at the dark and evil arts wielded against him in this chapter by chapter audiobook production of Robert E. Howard’s The Hour of the Dragon. The original work was published in four parts in Wierd Tales from December 1935 to April 1936, and later appeared as Conan the Conqueror (1950). |WIKISOURCE|

The Cairn on the Headland
By Robert E. Howard; Read by David Drage
1 |MP3| – [UNABRIDGED]
Podcaster: Dial P For Pulp
Podcast: March 2008
What lies beneath the stone cairn on the headland of Clontarf, where the Christian Irish defeated the pagan Vikings in pitched battle a thousand years ago? An unscrupulous extortionist plans to uncover the secret. First published in the January 1933 issue of Strange Tales of Mystery And Terror magazine.

Red Nails – A Tale Of Conan
By Robert E. Howard; Read by Mark Kalita
7 MP3s – Approx. 3.5 Hours [UNABRIDGED]
Publisher: Broken Sea Audio Productions / Hooligan Audiobooks
Published: December 2007 – January 2008
“Red Nails, a tale featuring the legendary Conan the Barbarian, was written by Robert E. Howard and began its written serialization in the July 1936 issue of Weird Tales. This thrilling audio novella begins with pirate-adventuress Valeria of the Red Brotherhood on the run after slaying a notable brigand. She is followed by Conan and the two soon fight their way to a great, walled city inhabited by two warring peoples. The adventure seekers soon find themselves embroiled in the feud and mayhem ensues as the city’s rulers make unholy plans for the mighty Cimmerian and his feisty female companion. Listen now as an ancient evil returns from oblivion and a wicked sorceress seeks to gain immortality at the cost of our Hyborian heroes!” 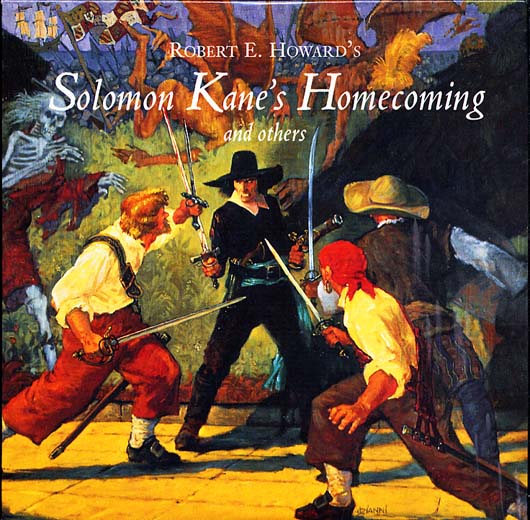 The Savage Tales Of Solomon Kane
By Robert E. Howard; Read by Paul Blake
1 CD – [UNABRIDGED]
Publisher: Wandering Star
Published: 1998
ISBN: 0953425304 (Limited Edition), 0953425304 (Ultra Limited Edition)
The CD, only available with purchase of one of two boxed sets, contains three Howard poems about his dour Puritan hero:
The One Black Stain
The Return of Sir Richard Grenville
Solomon Kane’s Homecoming
This CD is only available with purchase of either the The Savage Tales Of Solomon Kane “Limited Edition” boxed set (limited to 1050 copies) or the “Ultra Limited Edition” (same package but bound in goatskin and limited to just 50 copies).
Three poems by master fantasist Robert E. Howard are available in MP3 format. Read by Paul Blake, they were released as a promotion for a Wandering Star book on Kane
Listen to the poems:

From The Hells Beneath The Hells
By Robert E. Howard; Read by Ugo Toppo
1 33 1/3 RPM LP – [UNABRIDGED?]
Publisher: Alternate World Recordings
Published: 1975
Includes:
“The Song of a Mad Minstrel” – (poetry)
“The Curse of the Golden Skull” – (short story)
“Altars and Jesters – An Opium Dream” – (poetry)
“The Mirrors of Tuzun Thune” – (short story) The Adventures of Sailor Steve Costigan: Destiny Gorilla/Day of the Stranger
Based on a short stories by Robert E. Howard and a play by Novalyne Price-Ellis; Performed by a full cast
CD – [AUDIO DRAMA]
Publisher: Violet Crown Radio Players
Published: February 2004
Accompanied by his famous fighting dog Mike, Steve Costigan, the prizefighting sailor from Texas, brawls his way into a lover’s triangle. Yowza!