The SFFaudio Podcast #604 – A Bullet For Cinderella by John D. MacDonald, read by Winston Tharp

This UNABRIDGED AUDIOBOOK (5 hours 37 minutes) comes to us courtesy of LibriVox and was first published in 1955. 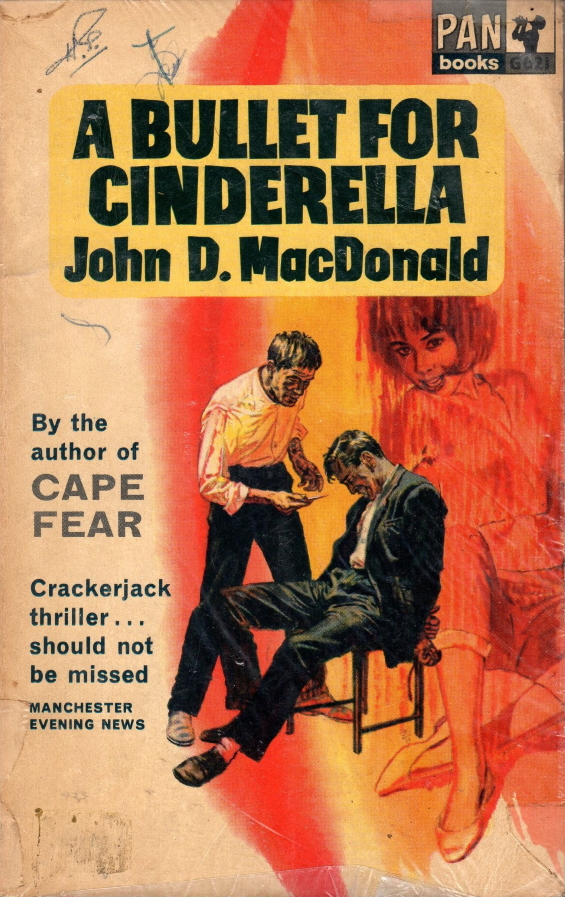 The SFFaudio Podcast #304 – Jesse, Paul, and Marissa talk about Time Out Of Joint by Philip K. Dick Also available is a |PDF| made from a scan of the original publication in Future Science Fiction, February 1958.

Naron of the long-lived Rigellian race was the fourth of his line to keep the galactic records.

He had a large book which contained the list of the numerous races throughout the galaxies that had developed intelligence, and the much smaller book that listed those races that had reached maturity and had qualified for the Galactic Federation. In the first book, a number of those listed were crossed out; those that, for one reason or another, had failed. Misfortune, biochemical or biophysical shortcomings, social maladjustment took their toll. In the smaller book, however, no member listed had yet blanked out.

And now Naron, large and incredibly ancient, looked up as a messenger approached.

“Naron,” said the messenger. “Great One!”

“Well, well, what is it? Less ceremony.”

“Another group of organisms has attained maturity.”

“Excellent. Excellent. They are coming up quickly now. Scarcely a year passes without a new one. And who are these?”

The messenger gave the code number of the galaxy and the coordinates of the world within it.

“Ah, yes,” said Naron. “I know the world.” And in flowing script he noted it in the first book and transferred its name into the second, using, as was customary, the name by which the planet was known to the largest fraction of its populace. He wrote: Earth.

He said, “These new creatures have set a record. No other group has passed from intelligence to maturity so quickly. No mistake, I hope.”

“None, sir,” said the messenger.

“They have attained to thermonuclear power, have they?”

“Well, thats the criterion.” Naron chuckled. “And soon their ships will probe out and contact the Federation.”

“Actually, Great One,” said the messenger, reluctantly, “the Observers tell us they have not yet penetrated space.”

Naron was astonished. “Not at all? Not even a space station?”

“But if they have thermonuclear power, where do they conduct the tests and detonations?”

“On their own planet, sir.”

Naron rose to his full twenty feet of height and thundered, “On their own planet?”

Slowly Naron drew out his stylus and passed a line through the latest addition in the small book. It was an unprecedented act, but, then, Naron was very wise and could see the inevitable as well as anyone in the galaxy.

Asimov wrote Silly Asses on July 29, 1957. To put that in context, just ten days earlier (July 19, 1957), as a part of Operation Plumbbob the USAF filmed five Air Force officers standing directly under an atmospheric nuclear detonation. The idea was to demonstrate the safe usage of nuclear weapons over civilian populations. Talked about on today’s show:
the great description, Audible.com, it’s a prison novel, it’s a dystopian science fiction novel, it’s a book collector’s novel, Philip K. Dick, a reality dysfunction, The Man In The High Castle, 1984 by George Orwell, “retconning“, Stalin, airbrushing history, a new Science Fiction idea!, Amazon’s Kindle, Mark Twain, “The Department Of Control”, J. Edgar Hoover, Simon is the most evil character ever, oddball individualists, a straw man gulag, one way of keeping the population in control is to send troublemakers away, another is to give them someone to hate, The Moon Is A Harsh Mistress by Robert A. Heinlein, the Attica Prison riot (1971), Arabella Rashid, entertainment media, when you can’t tell what the truth is anymore it’s very easy to control people, maybe it’s an allegory for our times, Paperback Parade, SF writers were wrong about what our times are like, Mars, crime novels, Science Fiction as a metaphor, people are scared of reading, “I like good writing”, Richard Stark’s Parker novels, getting the word out about Mars Needs Books!, Gargoyle Nights, H.P. Lovecraft, Clark Ashton Smith, Jack Vance, horror, fantasy, nice and short, short books pack a punch (and don’t waste your time), Stephen King, Patrick O’Brian, ideas, paperback novels from the 1950s, 1960s, and 1970s, customers want thick books, Winter In Maine by Gerard Donovan, were looking at a different readership today, James M. Cain’s The Postman Always Rings Twice, there’s nothing that doesn’t add to the story, “Lawrence Block is scary good”, Donald E. Westlake, Robert Bloch, Eight Million Ways To Die, A Pair Of Recycled Jeans by Lawrence Block, Evan Hunter (Ed McBain), Charles Ardai (was on SFFaudio Podcast #090), book-collectors, Murder Of A Bookman by Gary Lovisi (is also on Audible.com), collectable glassware, Sherlock Holmes Mystery Magazine, cool dialogue, Driving Hell’s Highway by Gary Lovisi (also on Audible.com), That Hell-bound Train by Robert Bloch, noir, Violence Is The Only Solution by Gary Lovisi (paperback), hard-boiled, revenge, betrayal, personality disorder, Sherlock Holmes, westerns, “if there’s one truth in the universe that I know it’s that Germans love westerns”, which frontier are you talking about?, The Wild Bunch, a western with tommyguns, Akira Kurosawa, Outland (is High Noon in space), Altered Carbon by Richard K. Morgan, hard-boiled, violence, the Martian national anthem, Prometheus Award, libertarian motifs, world-building, GryphonBooks.com, Hurricane Sandy, Wildside Press, POD Books, eBooks, fire and water, that paperback is still in readable condition in 150 years?, fanzines, Jack Vance, The Dying Earth, Robert Silverberg, Dell Mapbacks, paperbacks were disposable, used bookstores, sex books. Radio Project X, a great new audio drama troupe out of Toronto, makes a combination of compelling and humorous audio dramatizations – recorded live on stage. The latest one to reach my ears is centered around a terrific adaptation of a creepy Theodore Sturgeon story entitled The Other Celia (aka The Blonde With The Mysterious Body). Like the other Radio Project X episodes already released, this program is followed by a series of skits, all funny, and all very Canadian – the kind you’d hear on CBC radio in years past.

The Other Celia
Adapted from the short story by Theodore Sturgeon; Performed by a full cast
1 |MP3| – Approx. 1 Hour 10 Minutes [AUDIO DRAMA]
Podcaster: Radio Project X
Podcast: August 14, 2012
Something drastic should happen to all snoopers – but nothing as awful and frightful as this! First published in Galaxy, March 1957. [via The Sonic Society]