Talked about on today’s show:
the dream of Bryan Alexander, the nightmare that is Paul, 1940, 1962, almost a disaster, this story hit them like ton of bricks, Frankenstein, disturbing, a simple plot, leading you in circles, rising action, the horrible Freytag pyramid, creating a person out of dreams, a Joseph Campbell plot, learning Spanish, listen to the negatives, no one was unaware that the silent man, the unanimous night, it claustrophobic cloaks, the beginning of Moby Dick, in The Garden Of Forking Path, Jeff Vandermeer’s Ambergris, the circularity of the text, there is no “collected works” of Borges, Broges’ translations, the language of doppelgangers, the father and son angle, a mediation on parenthood, a god of fire, if Eric Rabkin were here, Prometheus, realizing you’re a dream, a trapped figure in endless circularity, parenting, once the colour of fire and now that of ashes, a grey man under unknown leaves, tributaries of sleep, weaving a rope of sand, coining the faceless wind, a folkloric reference, a Cornish legend, The Lottery Of Babylon, the company knows all, a ruin of a religion that somehow comes true, the most difficult task a man could undertake, an infinite amount of time for the hairs on the arm, not the god of the bible, food and figs, a dream god, a hilarious line from Celephais, I’m a prodigious dreamer, a dream man who dreams a dream man into existence, a dream written down, meta accusations in the post modern school, a hero to post-modern thinkers, The Babylonian Lottery, where the Zend language, characteristics of a society, too much leprosy, Tlön, Uqbar, Orbis Tertius, the moonness was going above the river, the beautiful language of a dream, Voltaire’s Zadig, a fake Babylon, the book of Zend, The Library Of Babel, real world Greek, this river, bamboo canoe, other burned temples, H. Rider Haggard, double negative, Xenophon’s Anabasis, 10,000 mercenaries, epic adventure, populated or unpopulated, in the aftermath of disaster, Detroit, Peter Jackson’s Lord Of The Rings, yet another abandoned village, The Warriors (1979), an optimistic version of New York, being a vegetarian, Frankenstein’s creature is a vegan, he’s got to dream some meat into being, this is Abel not Cain, where the story really gets cooking, his body is a temple, dialectic dreams, clouds of taciturn students, interpolate him into the real world, a man lecturing the clouds, The Boy Who Disappeared Clouds by Lawrence Block, seeing images in the clouds, people are like clouds in dreams, a two sided coin, the dialectics, dissection theater, in the Gnostic cosmogonies, a red Adam who cannot stand, the world was created by the demi-urge, Valis by Philip K. Dick, addendum to the creation story, Lilith, the red mercury story (a geopolitical urban legend), alchemical texts, a locked Wikipedia entry, the cold fusion of terrorism, a golem, a man made out of clay but without a soul, Adam of dust, Adam of dreams, the wizard is the dreamer, again Frankenstein, why would it have been better?, Edgar Allan Poe’s William Wilson, H.P. Lovecraft’s Hypnos, doppelganger fiction, mirrors, Borges’ philosophy of Poe’s Composition, the literary equivalent of Escher, more like Lovecraft than Dick, aristocratic families, grandparents who were big into books, loved suits, loved their hometowns, Buenos Aires, a love of reading, wrote about writing, letter writers, connected with their readers, strange visionary figures, gregarious men, authors confused (conflated) with his own characters, complex truth and curious parallels, beauty, meaning and the belief in the power of story, how we make sense of the universe and how we interpret knowledge, both seeking to blow minds, Borges read Lovecraft, There Are More Things by Jorge Luis Borges is dedicated to Lovecraft, arguing with Lovecraft, cosmic is the word (not eldritch) or dream, The Call of Cthulhu, interpolate connects us to Dick as well, a bit of sense data, we don’t see just by having the world come into our eyes, we also project, the story is not complete, filling in the steps between fire and grey, Dick, Borges, and Lovecraft are working the world in a different way showing us their dreams, what would a Borgesian city in Kadath (the Dreamlands) look like?, Inception is a Borgesian story, far more concreteized, a heist, the grey man kissed the mud, the blades which were lacerating his flesh, the brambles delacerated his flesh, where did the blades come from?, what is certain, there’s something on the bank injuring him (or the blades are in him already), the crown of thorns, the temple was crowned, from out of the south, almost biblical, interesting, the plaything of forces far greater than he can comprehend, mental terror, the incessant trees, obligation, inconsolable shriek, the birdless morning, the phoenix, the tiger is man, Tyger Tyger, horses as a symbol of force, power, dynamism, and nobility, horse or tiger, domesticated vs. wild, super enigmatic yet we know exactly what happened, the creation of the heart, the moon, fourteen lucid nights, from lucidity to obscurity?, meticulous love, to rectify it with a glance, invoking the name of a planet, Mars?, Venus?, Mercury?, it could be the penis, much more meticulous from, the innumerable hair was the most difficult task, full moon?, starting the cycle again, the circularity of the ruins, re circularity, a disc vs. an amphitheater, the geography of the Library of Babel, a torus, the bottom of an amphitheater, it’s a magic spell, Lovecraft fandom, Cthulhu prayer breakfast, Borges was the darling of the literary set when he was alive, the New American Library edition, Borges is still a god of modern literature, intertextuality, Borges’ made up quotes and citations, Ibid by H.P. Lovecraft, a parody of 19th century scholarship, the adventures of a man’s skull, groundhogs worshiping a skull as a deity, the sense of humour, S.T. Joshi, a classic schoolboy error, BBC Radio documentary, humour in Borges, loops and whorls, sophisticated humour, blades vs. brambles, Poe the prankster, Herman Melville, extraordinary sentences, puckish and wry, apotheosis. 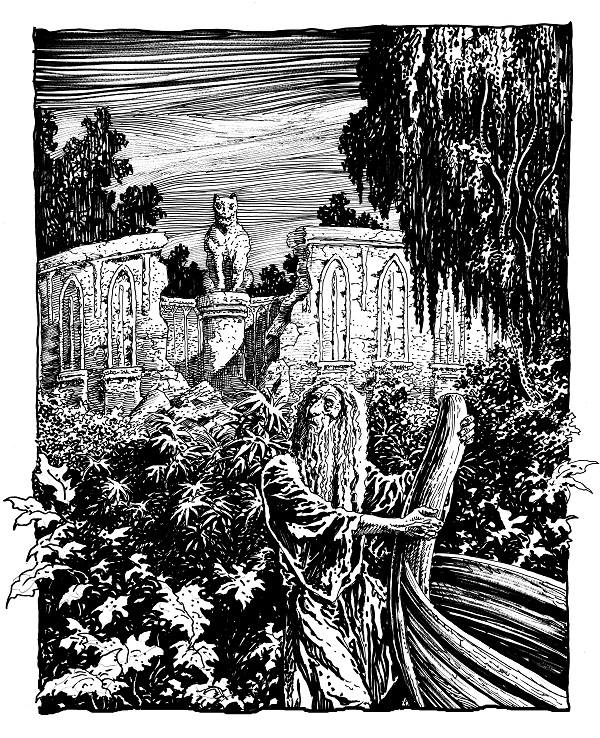 They don’t make books like the used to. Check out the first two volumes of this STUNNING twelve volume History Of Egypt, Chaldea, Syria, Babylonia, and Assyria, first published in English between 1903 and 1906. The complete collection (either 12 or 13 books) contains more than 1,200 coloured plates, photographs, drawings and illustrations!

History Of Egypt, Chaldea, Syria, Babylonia, and Assyria, Volume 1
By G. Maspero; Edited by A.H. Sayce; Translated by M.L. McClure; Read by Professor Heather Mbaye
29 Zipped MP3 Files or Podcast – Approx. 7 Hours 16 Minutes [UNABRIDGED]
Publisher: LibriVox.org
Published: June 24, 2009
Source: Gutenberg.org
A masterwork by of one of the fathers of modern egyptology. This work, in twelve volumes, was translated from the French original, “Histoire ancienne des peuples de l’Orient classique.” Maspero was a largely self-taught master of hieroglyphic translation. In November 1880, he was placed at the head of a French archeological mission, which developed later into the Institut Français d’Archéologie Orientale.

History Of Egypt, Chaldea, Syria, Babylonia, and Assyria, Volume 2
By G. Maspero; Edited by A.H. Sayce; Translated by M.L. McClure; Read by Professor Heather Mbaye
36 Zipped MP3 Files or Podcast – Approx. 7 Hours 53 Minutes [UNABRIDGED]
Publisher: LibriVox.org
Published: October 8, 2009
Source: Gutenberg.org
A masterwork by of one of the fathers of modern egyptology. This work, in twelve volumes, was translated from the French original, “Histoire ancienne des peuples de l’Orient classique.” Maspero was a largely self-taught master of hieroglyphic translation. In November 1880, he was placed at the head of a French archeological mission, which developed later into the Institut Français d’Archéologie Orientale.