The SFFaudio Podcast #474 – Jesse and Paul Weimer talk about Glory Road by Robert A. Heinlein 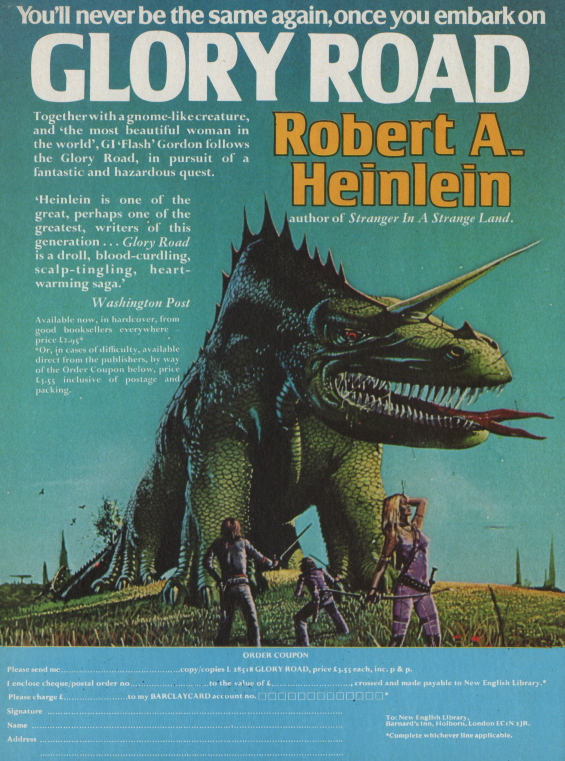 The SFFaudio Podcast #277 – The Wonderful Window by Lord Dunsany; read by John Feaster. This is an unabridged reading of the story (11 minutes) followed by a discussion of it. Participants in the discussion include Jesse and John Feaster.

Talked about on today’s show:
Saturday Review, February 4th, 1911, the secret story behind of all of modern fantasy, do you listen to podcasts?, our SPONSOR: Downcast, an app for iPhone and iPad, small size, big impact, location based downloading, a super-customized experience, audio drama, The Red Panda Adventures, Decoder Ring Theater, Downcast allows you to lock episodes, the key to understanding, the beginning of binge-watching, Sidney Sime, The Book Of Wonder by Lord Dunsany, its criminal that Lord Dunsany, H.P. Lovecraft, J.R.R. Tolkien, a new podcast idea, Appendix N: Inspirational And Educational Reading, The Dungeon Master’s Guide, take up this mantle, Gary Gygax, Dunsany’s last champion, Poul Anderson, John Bellairs, Leigh Brackett, Frederic Brown, Edgar Rice Burroughs, Lin Carter, L. Sprague de Camp, Fletcher Pratt, August Derleth, Lord Dunsany, Philip Jose Farmer, Gardner Fox, Robert E. Howard, Sterling Lanier, Fritz Leiber, H.P. Lovecraft, A. Merritt, Michael Moorcock, Andre Norton, Andrew J. Offutt, Fletcher Pratt, Fred Saberhagen, Margaret St. Clair, J.R.R. Tolkien, Jack Vance, Stanley Weinbaum, Manly Wade Wellman, Jack Williamson, Roger Zelazny, let’s understand it, S.T. Joshi, “the death of wonder”, bullshit, the inaccessibility of our fantasies, did the Arabic man see Golden Dragon City?, wouldn’t we see something different?, “the magi”, the Scheherazade salesman, its about writing fantasy, its about reading fantasy, reading life and real life, getting addicted to Game Of Thrones, it seems like it is about television, serial fiction, the August days are growing shorter, winter is coming, George R.R. Martin, prose poems, deft brushstrokes, a more devastating fairy tale, is the window a metaphor within that world, The Monkey’s Paw by W.W. Jacobs, the yellow robes, mood and temperament, what would Oprah see?, a soap opera, silent pictures, the constellations, The Crystal Egg by H.G. Wells, science fiction, Jesse’s pet theory on the opening credit sequence of Game Of Thrones, the four houses, dragons and bears, orrery, Ptolemy vs. Copernicus, epicycles, orbital clockworks, Ringworld by Larry Niven, the inside of a Dyson sphere, Westeros, a fish-eye lens, a D&D style hex system, the mechanistic unplaying of the plot, it’s not a half-assed Tolkien, HBO, a metaphor for The Wonderful Window, maybe it’s a bowl?, a fantastically wealthy Lannister home?, that guy’s based on The Kingpin, credit sequence, Dexter‘s morning routine, murdering coffee, “oh my god it’s over”, envisioning greater lives, some guy in Golden Dragon city is looking through a window at 1911 London, Lion City (London), make it WWI, the zeppelin terror, had it been written a few years later would we not assume the red bear as Communist Russia, escape to the secondary world, beaten down into the proper shape for Business, capital “B” business, “a touch of romance”, daydreaming, a frock coat, a bookstore, “emporium”, Walmart as a soul crushing emporium, howling newsboys, the birds in the belfries, “the seven”, analogues for priests and nuns, dragons the most evocative fantasy animal, a silver field, what prompts the destruction of Golden Dragon city, Darkon (2006), LARPers, interesting, good, and sad, fantasy lives on the weekend, a cardboard factory, typical American upper-lower class jobs, religion, plunking away god-dollars, the popular conception of D&D, video games, Elvis’ hips, KISS, better jobs, Detroit in ruins, work, podcasts to stave off the rats gnawing, John’s gaming group, soul crushing and beautiful, Edward Plunkett, H.G. Wells, toy soldiers, the start of modern war-gaming, empire, “this dang story”, 14th century Hungary, Angelmaker by Nick Harkaway, names, Friend, Spork, Carmilla (is a savory name), carnstein (flesh-stone), Mergin and Chater -> margin and cheater?, a used bookstore business is not one designed to make money (precisely), Chapters, the artificial love of books, the way Scrooge would run his business, the one room apartment, “tea-things”, we ended on a happy note, fantasy and escapism, there’s not much else past The Silmarillion, Elmore Leonard, Jack L. Chalker‘s last unpublished book, old-fashioned TV watching (no recording), “this window goes nowhere”, Mr. Sladden’s destruction of the window is better than had it been broken by someone else, the scent of mysterious spices, a breath of Golden Dragon City.