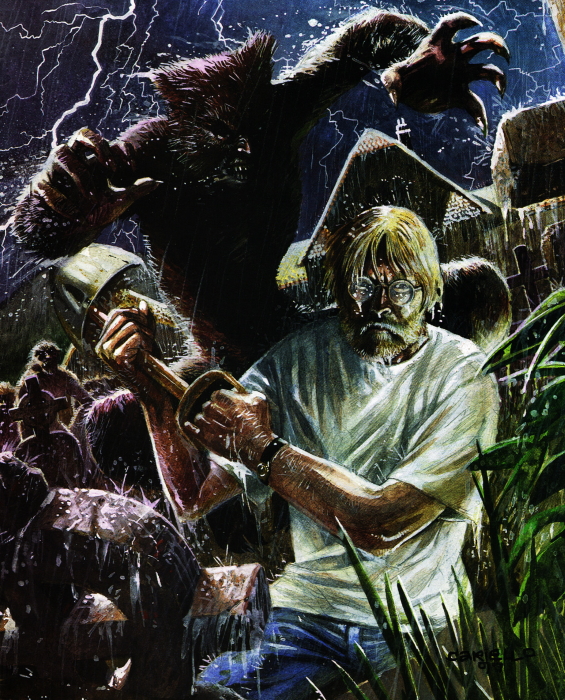 Talked about on today’s show:
Weird Tales, June-July 1939, The Midnight Meat Train, the audio drama from Suspense (Blue Hours), Los Angeles, a truly underground story, how far the infection has spread, like Russian nesting dolls, Pickman’s Model, Pickman’s painting entitled “Subway Accident”, Death Line (1972) (aka Raw Meat), The Terror Of Blue John Gap by Sir Arthur Conan Doyle, a rabbit warren, movie adaptations, C.H.U.D. (1984), Escape From New York (1981), they’re everywhere, very 80s, atrocious dialogue and logic, an old dodge, John Carpenter, the 59th street bridge, the society of CHUDs, female inmate, a mini-romance, how most people interact with this story, I could barely get through it and I really liked it, weird pacing, The Texas Chainsaw Massacre (1974), the camera as observer, Christopher Lee and Donald, “There are monsters in the tunnel inspector!”, a film out of its time, the old boy’s network (is also from Far Below), a mean bully thief sexist, looting the place, two different movies, it somehow works, so garish, quite murky, incredible tunnels in the London Underground, ghost stations, Creep (2004), ghost stories/urban legends, the monsters are descendants of the survivors of a tunnel construction collapse, The Descent (2005), the man aka the cannibal, “mind the doors”, an exploitative horrible monster mess movie, she’s pregnant, keep the community going, a family crypt, a tragedy horror, is Creep (2004) a remake of Raw Meat (aka Death Line)?, where does folklore come from?, a secret medical experiment facility, he’s always preceded by rats, The Graveyard Rats by Henry Kuttner, The Gruesome Book, a race of subterranean beings, a dead body animated by rats, The Gripping Hand and The Mote In God’s Eye, the watchmaker moties, Gremlins (1984), the tendrils out of Lovecraft grow deep, Mimic (1997), Mimic by Donald A. Wollheim, a mad scientist with other responsibilities, giving your right arm, I’m not quite there yet, a reasonable depravity, the Duke Of New York is A#1, a little smoke break, calling forth the CHUDs, we follow Kurt Russell following that guy, Franka Potente looking for George Clooney, empathy for a rapist, it’s all connected, a theme of degeneration in the dark, she’s a bitch, a horrible manipulative person, a nice symmetry, social satire, black humour, this is horrible and great as well, Syria and Russia, this is why the Indians sold Manhattan so cheap, where is The Descent supposed to take place?, they’re albino cave dwellers, Monsters (1990) TV show adaptation of Far Below, The Midnight Meat Train, Clive Barker’s obsession with raw meat, Bradley Cooper, Limitless,
the wrong carriage, butchered bodies, the butcher, the true city fathers, who is the narrator talking to?, you’re going to eat my wife, a choice ending, a deep cut, a new recruit, they weren’t allowed to report on this, a student, a photographer, a vegan, ultra-horror, he’s grain fed!, starting with an image, holding on vs. hanging from, Mahogany, the mythological ferryman, their damnation until they can pass it on, The Books Of Blood by Clive Barker, Dagon (the fanzine), he hadn’t read any Lovecraft at that point, Bryan may have lived Far Below, The Warriors (1979), Death Wish (1974), the Washington, D.C. subway system, Fallout 3, Death Line (Raw Meat) 1972, Escape From New York (1981), C.H.U.D. (1984), sewers, Monsters (1990) TV show, Creep 2004, The Descent (2005), attested by every country in the world and every people, ghouls in the bible?, J.R.R. Tolkien has it, the barrow wights, Edgar Rice Burroughs, white furry monster, the Morlocks, H.G. Wells invented CHUDs (in The Time Machine), The Midnight Meat Train (2008), the vein, going deep, Journey To The Center Of The Earth by Jules Verne, monks are more heavenly, the Wizard Knight worlds, Gene Wolfe, angels, burrowing into mother earth, the long tradition of the earth as maternal, All Quiet On The Western Front, WWI, Château-Thierry, Verdun, bleed France white, “they shall not pass”, the Balrog, delving too deep, a battlefield map, battlefield commander, Vimy Ridge, 12 kilometers of tunnel, Passchendaele (2008), Thompson, the Maxim gun, domestic life, Carl Akeley, taxidermy, big game hunting, apes, killing a leopard with his bare hands, Indiana Jones, The American Museum Of Natural History’s Akeley Hall, Heart Of Darkness, Apocalypse Now, Friedrich Nietzsche on the abyss, ghouls like in Pickman’s Model, hinting, Pickman’s Model is the fictionalized version of Far Below, part simian part canine part mole, Nyarlathotep darkness, The Rats In The Walls, howling blindly, idiot flute players, the dark pharaoh, August Derleth, Cthulhu Water, The Facts In The Case Of Arthur Jermyn And His Family aka The White Ape, it’s not the family, Greek vs. Biblical, the acme of human progress tears itself to bits, national or familial genealogy, the family business, plump Captain Norris, the Morlock connection, staring into the abyss, the hidden race sub-genre, Richard Sharpe Shaver, Edward Bulwer-Lytton, Charlotte Perkins Gilman, they colonize us, The Mound by Zealia Bishop and H.P. Lovecraft, an inverted high-tech monstrous civilization, let’s see where it goes, less genetic and more philosophical, the description of the funding, NYC Mayor Jimmy Walker, Tammany Hall, childhood power fantasy, for our own safety, you’d understand, carte blanche, you can’t handle the truth, he’s the bad guy, in the warm light of day, taking precautions, the deepness rotting at the core of the Earth, involving the feds, the classic American cop story, NYC police corruption, Prince Of The City with Treat Williams, the War on Terror, At The Mountains Of Madness, Boston subway stations, Bram Stoker, high-tech, nascent technology, The Statement Of Randolph Carter, the telephone, it’s a tasty story, the thing was upon us, out of the darkness, Supernatural Horror In Literature, I learned a lot from Lovecraft, Quiet Please: The Thing On The Fourble Board, they dug too deep!, listen at night in the basement, things that are digging up, Jon Petwee era, Doctor Who: Inferno, Star Trek’s Mirror, Mirror, the Brigadier’s eyepatch and Spock’s beard, evil Captain Archer, green gas causing degeneration, environmentalism, The Green Death another minging story, The Silurians, Call Ghostbusters (1984)!, Edge Of Darkness (1985), Homer, Polyphemus he only sleeps in a cave, neanderthals, and the niter, it grows! Three times Randolph Carter dreamed of the marvelous city, and three times was he snatched away while still he paused on the high terrace above it.” Randolph Carter embarks on an epic quest across a world beyond the wall of sleep in search of an opulent and mysterious sunset city. When he prays to the gods of dream to reveal the whereabouts of this magical city, they do not answer, and his dreams stop altogether. Undaunted, Carter resolves to go to Kadath, where the gods live, and beseech them in person. However, no one has ever been to Kadath, and no one even knows how to get there—but that won’t stop Randolph Carter from trying.

We all love the quest story. Without some sort of a quest, the story falls into introspective navel gazing, and becomes as interesting as reading about someone’s cup of tea growing cold near a rain-soaked window overlooking a drab landscape of bent grass fading in the waning light of gloaming. Quests are good, in literature, games, and life. H.P. Lovecraft gives us a quest, and I liked it, for the most part. Those of you familiar with Lovecraft will undoubtedly nod your chin when I suggest that this story is a little weighted with those wonderfully complex names of gods, of places, of rites practiced in secret darkness. If you can overlook the name thing and concentrate on the story, it’s nice enough. While I don’t believe this is Lovecraft at his best, I do feel it’s a must for those Lovecraft enthusiasts.The audiobook is roughly four and a half hours, and I’ll admit it, I increased the speed by a factor of three, sometimes four. Jim Roberts is the narrator, and I feel this is an example of mismanaged casting. Roberts is a competent narrator, and I have enjoyed some of his readings in the past. But his voice sounds like your grandfather’s brother, which is just fine if the narrative follows such a gentlemen. But it doesn’t work well when the protagonist is for all intensive purposes, a younger man full of vigor and drive. It’s a minor grouse, but I never managed to rid myself of this incongruity between reader and main character.