James Gunn filmed this interview with Damon Knight sometime in the 1960s, it features Knight discussing Science Fiction from a time when there was no name for it. He begins with stories of of moon voyages (Lucian, Cyrano de Bergerac) and moves on to 19th century authors Edgar Allan Poe and Jules Verne.

Here’s the editorial introduction to The Country Of The Blind from Amazing Stories, December 1927:

We take many things for granted in this world. We accept many preconceived notions about an amazing large number of things, which, like as not prove to be amazingly wrong. If any story ever proved this point, The Country Of The Blind certainly is that one. The author exploits the well-known saying , “In the country of the blind the one-eyed man is king.” Indeed that statement is most easy to believe and all logic should point that way. In reading this interesting story, you will soon find out how far wrong even seemingly good logic can be.

The above, presumably written by Hugo Gernsback himself, ably covers most of what I thought to say about this story. But that didn’t quite stop me.

I guess I appreciated The Country Of The Blind because there’s a very deep skepticism to it, about human nature, about society but most importantly about the claim of wisdom. Man is a foolish, foolish beast. His only guide to the future is what has come before. But we’re always tempted to take some distilled bit of wisdom and use it that to do our thinking for us. What does it say for us when for every proverb we use to rationalize a decsion there is another proverb that could have supported an alternate?

The Country Of The Blind
By H.G. Wells; Read by llite (aka George Cooney)
1 |MP3| – Approx. 61 Minutes [UNABRIDGED]
Publisher: LibriVox.org
Published: January 17, 2010
While attempting to summit the unconquered crest of Parascotopetl, a mountaineer named Nunez slips and falls down the far side of the mountain. At the end of his descent, down a snow-slope in the mountain’s shadow, he finds a valley, cut off from the rest of the world on all sides by steep precipices. Nunez has discovered the fabled Country of the Blind. The valley had been a haven for settlers fleeing the tyranny of Spanish rulers until an earthquake reshaped the surrounding mountains and cut it off forever from future explorers. The isolated community prospered over the years despite a disease that struck them all blind. As the blindness slowly spread over the generations and the last sighted villager had died, the community had fully adapted to life without vision. First published in the April 1904 issue of the Strand Magazine. Included below are all the audio drama adaptations I could find. I recommend the episode of Escape with Paul Frees. Here’s the uncredited editorial introduction, presumably by Hugo Gernsback himself, to The Thousand-And-Second Tale Of Scheherazade as it appeared in the May 1928 issue of Amazing Stories:

“When we realize that this story was written nearly 100 years ago, we must marvel at the extraordinary fertile imagination of Poe. Poe was probably the inventor of “Scientifiction” as we know it today, and just because the story was written almost a century ago, certainly does not make it less valuable. On the contrary, it becomes more valuable as time passes. It is just as applicable to the modern man, who is mostly in the fog about what goes on around him in science today, as his predecessors were a century ago.”

Indeed, if you read it straight through, without pausing to read the footnotes, you’ll probably only get a vague sense of what’s going on in this story. And though I think I tumbled to the idea pretty early on, I still found myself in many places echoing the king’s many harrumphs. I’m not one to use the term “genius” lightly, but if anyone is worthy of the term, it is certainly Edgar Allan Poe. Even in his lesser works, like The Thousand-And-Second Tale Of Scheherazade, there is a wry brilliance that may be entirely matchless.

And here’s the matching |PDF|.

The SFFaudio Podcast #124 – a discussion of the Audible Frontiers audiobook Beyond This Horizon by Robert A. Heinlein with Scott, Jesse, and Tamahome.

Talked about on today’s show:
“We believe that an armed society is a polite society”, under the pen name Anson MacDonald, his 2nd novel, For Us The Living was first, “no nudity or free love”, The Amazing, The Astounding, And The Unknown by Paul Malmont, “a string of ideas broken up by action”, like two novellas put together, a novel about genetics and dueling, list of characters and terms, reversed names like Korea, “he’s a special guy”, moderators, germplasm, “sperm wars”, engineering away violence, Gattaca, Brave New World, “great egg!”, naturals, experimentals, written in the time of Hitler, kids are like Dune, Felix wonders what’s the point, reincarnation?, “says crazy ideas like they’re common sense”, synthesist, Scott has some quotes ready, Felix doesn’t want kids, “Felix just needs a good woman”, rambunctious scene with Felix and Phyllis, “I’m gonna kiss ya!”, Galactic Suburbia would not like this book, Heinlein’s characters, frozen football player, “everyone’s going to be a telepath”, John W. Campbell, “they don’t talk about telepathy anymore”, Podkayne Of Mars, Heinlein and fertility, Heinlein FAQ, the economic system — Social Credit, Beyond This Horizon on Wikipedia, spread the wealth, “What is money?”, it all goes to 0’s and 1’s, waterbed conception, The John W. Campbell Letters, bringing up super-writers, we never change, Campbell hated Dune Messiah, Felix is a “starline”, no Heinlein sequels??, “needs more telepathy”, best Heinlein novel?, Moon Is A Harsh Mistress, Double Star is like Moon Over Parador with Richard Dreyfuss, Starship Troopers has an action-packed start, Heinlein’s short stories like By His Bootstraps with Dreyfuss dramatized on 2000X, Red Planet with pet ball that’s an alien (now I get the Willis joke), Have Spacesuit Will Travel starts well, Heinlein as a dad, Fullcast Audio did a lot of these, Tunnel In The Sky just arrived and is like The Hunger Games, it’s a sci-fi Lord Of The Flies, Full Cast Audio is trying to be family friendly, nudity, worst Heinlein plot?, will the future remember football?, the sport “bligablong”, let’s read the opening, “the halt?”, serialized like The Space Merchants, “it’s all of those things and much more!”, it’s quotable, is the U.S. more polite?, England, duels are stressful, old reviews, 1900-1950 era, 1984, Brave New World, Heinlein starts the SF novel and hardback trend, Hugo Gernsback, Scott loved Foundation, Nazis on the moon, Rocket Ship Galileo, generation ship in Universe (nice old cover), “sucker for space.” 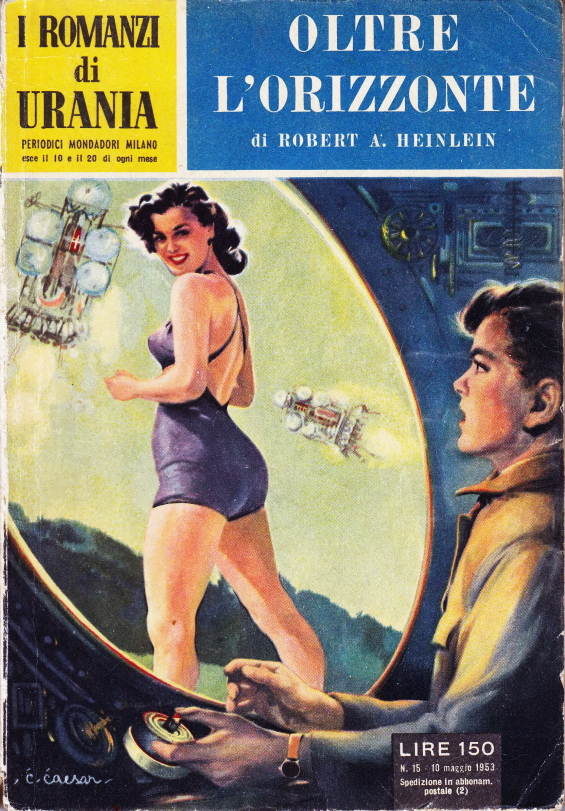 Forgive me, I’ve posted part of this before, but it’s good enough to post twice. Frederik Pohl and Isaac Asimov were interviewed for a 1972 show called The First Edition. Apparently the show never aired, and was never edited.

I repost the interview, in part because of how damn cool it is, and also in part because it is just the excuse I need to post what might very well be Frederik Pohl and Isaac Asimov first appearance together in print (in the letters column of the June 1939 issue of Thrilling Wonder Stories). Be sure to listen, it’s a terrific interview! In it Asimov responds to the “New Wave” and attacks neo-Luddites, and Pohl protests the takeover of Science Fiction by the “English lit majors” (Pohl didn’t finish high school).

Be sure to read the letters below in which the two Brooklyn boys, Fred and Isaac, grumble about SF. Pohl has some sharp words for the art of Frank R. Paul and Asimov swears he will eat Uranus!

[via The Voices Of Fandom and with props to “Burbank396”]