The National Endowment for the Arts presents a complied interview piece on Ursula K. Le Guin’s A Wizard Of Earthsea.

Talked about on today’s show:
Call him Jim!, James Patrick Kelly’s FREE READS podcast, “a gift story”, PBS, Mayan temples, ancient Mayan empire, Copán (Honduras), “time passes”, “2,000 words of nothing happening and 200 words of everything changes”, is it Science Fiction or Fantasy?, David G. Hartwell, Katherine Cramer Year’s Best Fantasy 3, 3D TV, the Earstone is the iPod Nano’s successor, Catholicism, religion, it’s a Horror story, sacrificial victims who volunteer, is Amirah hallucinating?, David Hume on miracles, take a miracle and make it a recipe, Memphis (Egypt), is religion a fantasy?, what is slipstream?, proto-slipstream, “Kelly Link is a goddess”, Feeling Very Strange: The Slipstream Anthology edited by James Patrick Kelly and John Kessel, cognitive dissonance, slipstream encourages cognitive dissonance, “for every religion there is an equal and opposite religion”, “making the familiar strange and the strange familiar”, horror, comedy, Fantasy, The Lord Of The Rings, Science Fiction, Nine Billion Names Of God by Arthur C. Clarke, The Crawling Chaos, James Patrick Kelly doesn’t fully understand The Pyramid Of Amirah, is the Dalai Lama happy?, stay in your god tombs, The Girl Detective, Karen Joy Fowler, Carol Emshwiller, Franz Kafka, readers are happier when they’re really really surprised, most readers don’t re-reread stories, slipstream is a balcony on the house of fiction, behind the push of science is the turbulence of religion and the fantastic, Bruce Sterling, Ted Chiang is slipstream?, J.R.R. Tolkien, some short stories are Rorschach tests, Bruce Coville’s Full Cast Audio, Robert A. Heinlein’s juvenile novels, the love hate relationship with Heinlein, Heinlein’s villains are all straw men, Starship Troopers, The Moon Is A Harsh Mistress, Heinlein’s sexy mother, Heinlein’s late career needed editing, Stranger In A Strange Land, stories in dialogue with other stories, Think Like A Dinosaur is in dialogue with The Cold Equations by Tom Godwin (and the controversy about it), The New York Review Of Science Fiction, not all problems are institutional problems (you are going to die), institutional facts vs. brute facts, John W. Campbell, was Campbell a terrible editor?, “all stories must have telepathy”, the story that must not be named (in Galaxy SF April 1975), Jim Baen, religious Science Fiction, Death Therapy by James Patrick Kelly, Terry Carr, The Best Science Fiction of the Year #8, collaborations, John Kessel, Jonathan Lethem, Robert Frazier, ISFDB, The Omega Egg, Mike Resnick, Kafkaesque: Stories Inspired by Franz Kafka, Tachyon Publications, The Secret History Of Science Fiction, The Drowned Giant by J.G. Ballard, The Lottery Of Babylon by Jorge Luis Borges, Max Brod, Joe Hill, Heart Shaped Box, You Will Hear The Locust Sing by Joe Hill, T.C. Boyle, Michael Chabon, Carter Scholz, Don DeLillo, Lucius Shepard, The Nine Billion Names Of God by Carter Scholz, A Recursion In Metastories by Arthur C. Clarke, post-cyberpunk stories, what is post-cyberpunk?, Mirrorshades: The Cyberpunk Anthology, Cheap Truth, the way technology changes the way we are, Cory Doctorow, Charles Stross, a new cyberpunk anthology is in the works, is there pre-cyberpunk?, Blade Runner, Philip K. Dick isn’t really cyberpunky, steampunk has a vision, what is the ethos of a steampunk story?, alternate history, goggles and zeppelins vs. computer hacking and mirror-shades, Pavane by Keith Roberts, William Gibson, Boneshaker by Cherie Priest, Bernardo’s House is an iconically Jim Kelly short story, Isaac Asimov, robots, a post-cyberpunk character, a prim and proper sex doll, There Will Come Soft Rains by Ray Bradbury, Mary Robinette Kowal, puppets, a stage adaptation of There Will Come Soft Rains. 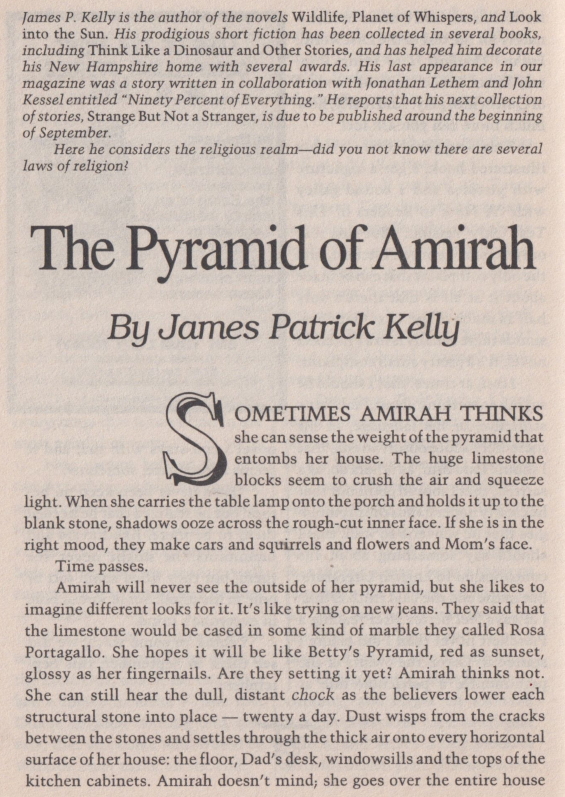 Here’s the terrific 2006 BBC Radio 3 documentary Weird Tales: The Strange Life Of H.P. Lovecraft, broken up into 5 parts and with unnecessary images (which I’ve minimized) for YouTube.

“Geoff Ward examines the strange life and terrifying world of the man hailed as America’s greatest horror writer since Poe. During his life Lovecraft’s work was confined to lurid pulp magazines and he died in penury in 1937. Today, however, his writings are considered modern classics and published in prestigious editions. Among the writers considering his legacy are Neil Gaiman, S.T. Joshi, Kelly Link, Peter Straub and China Mieville.”

There’s actually a lot to listen to (or eventually download via radioarchive.cc) over on BBC Radio 7 this weekend and next week.

The Twilight Zone – Free Dirt
Based on the story by Charles Beaumont; Performed by a full cast
[RADIO DRAMA]
Broadcaster: BBC Radio 7
Broadcast: Saturday at 6pm and Midnight
Penny-pinching Luther acquires soil from a cemetery to grow his vegetables. But there’s a grim price he must pay. Starring Eric Bogosian, with Stacy Keach as the Narrator it was written by Charles Beaumont and adapted for radio by Dennis Etchinson.

Dalek I Love You Too
By Colin Sharpe; Performed by a full cast
[RADIO DRAMA]
Broadcaster: BBC Radio 7
Broadcast: Sunday at 6pm and Midnight
A sequel to Dalek I Love You, we revisit enigmatic hero Nigel English in his quest to find a part in the new Doctor Who series, with the hope of meeting his father, who Nigel believes to be the Doctor himself. First broadcast in March 2008.

Fantastic Journeys – The Faery Handbag
By Kelly Link; Read by Maggie Blake
[ABRIDGED?]
Broadcaster: BBC Radio 7
Broadcast: Monday at 6.30pm and 12.30am
A distraught young woman reveals how a magical handbag has caused her to lose both her boyfriend and grandmother. New to Radio 7.

Trouble With Lichen
By John Wyndham; Read by Joanne Tope
[ABRIDGED]
Broadcaster: BBC Radio 7
Broadcast: Weekdays at 6.30pm and 12.30am
Recorded especially for Radio 7A biochemist stumbles upon a discovery which could change the course of humanity by isolating a strain of lichen that actually slows down the aging process.

And airing under the “Crime and Thrillers” moniker is…

Above Suspicion
Based on the novel by Helen MacInnes; Read by Emma Currie
Broadcaster: BBC Radio 7
Broadcast: Monday to Friday at 9.30am, 8.30pm and 1.30am
As Europe teeters on the brink of World War II, a naïve young British couple are swept into the unfamiliar world of espionage. This series was made-for-Radio-7 and first broadcast in 2007 to mark the centenary of the birth of Helen MacInnes, the Scottish-American thriller writer who was hugely influential in the 1940s, 50s and 60s. It was produced by Eilidh McCreadie.

“Geoff Ward examines the strange life and terrifying world of the man hailed as America’s greatest horror writer since Poe. During his life Lovecraft’s work was confined to lurid pulp magazines and he died in penury in 1937. Today, however, his writings are considered modern classics and published in prestigious editions. Among the writers considering his legacy are Neil Gaiman, S.T. Joshi, Kelly Link, Peter Straub and China Mieville.”

This should be available via the ‘Listen Again‘ feature for 7 days after the broadcast too. This is exciting isn’t it?

Many thanks to Roy, or intrepid UK sleuth, for this exquisite find.