The SFFaudio Podcast #306 – The Fall Of The House Of Usher by Edgar Allan Poe; read by Mike Vendetti. This is an unabridged reading of the story (49 minutes) followed by a discussion of it. Participants in the discussion include Jesse, Julie Davis, Bryan Alexander, and Mike Vendetti

Talked about on today’s show:
LibriVox.org, Audible.com, a Reader’s Digest version, a ponderous vocabulary, prolixity, Poe the hoaxer, the part of him that invented the mystery short story, a corpse flower, this is what Lovecraft does, “he’s done his research!”, words made by mad men, mapping the elephant’s outline, the movies, the comics, the Wikipedia entry, The Haunted Palace by H.P. Lovecraft, the Roger Corman movie, the poem is the outline for the story, the history of the house of usher, dead trees with white trunks, New Jersey, the lutes well tuned law, porphyrogene – “born to the purple”, synecdoche, a photo negative, upside down and inverted, golden banners, the fungi, The Tell Tale Heart, The Bells, a republic society in love with aristocracy and royalty, The Masque Of The Red Death is a dystopia, Hop Frog, “its beautiful … but horrible things happen”, John Buchan, broken off pieces of themselves, Thomas A. Shippey, the Vatican astronomer, no titles allowed anymore, Queen Elizabeth II, Br. Guy Consolmagno, absentee royalty, a super-mix, “evil things in robes of sorrow”, entombed, equating architecture and person, you can’t separate Roderick from his sister, “I heard it man”, why did he dare not speak?, buried alive, twins and twinning, the 1989 adaptation of The Fall Of The House Of Usher, why they can’t just tell the story in adaptations, this is hospice care, was Roderick tormented by his twin sister?, I see a skull, the house is a skull, the trees are ribs or arm bones, a ghost, dying of old age, reason, rationality, Guy de Maupassant’s Who Knows, the furniture represents the faculties, the end of The Life Of Pi, the miasma, an unhealthy atmosphere, in awe of Poe, Everything That Rises Must Converge by Flannery O’Connor, the Usher stump, the stump of the tree of Jesse, a tottering mind, everything’s lined with copper, a Frankenstein motif, a long family line of incest, “it had put forth no enduring branch”, “so lain”, viewing it as a story about incest, set in the location of Hammer Horror, Middle Lovecraft, seeing Lovecraft through Poe, a cyclopean vocabulary, H.P. Lovecraft’s Favorite Weird Tales edited by Douglas A. Anderson, crazy complicated sentences, Walden by Henry David Thoreau, CraftLit, the prologue to The Scarlet Letter, reading Poe aloud, Supernatural Horror In Literature, oral cadence, the very summits of artistry, fictional miniaturists, Ligeia, another dead woman story, so Lovecraft, he loves his architecture, “sharing a single soul”, the crack, “the eye of a scrutinizing observer”, laughing out loud, the unnamed narrator is of the same class as Roderick, context for the story, science stories, buried alive stories, The Pit And The Pendulum, sense experience, again New Jersey, Italy, The Scarlet Letter by Nathaniel Hawthorne, weird fiction out to wazoo, why do they do that?, demented messed up stories, Young Goodman Brown, Rappaccini’s Daughter, supernatural elements, sense experience, an utter depression of soul, the after dream of the reveler upon opium, the dropping of the veil, the veil of dreams, the after-dream is after the dream?, the veil is beautiful, a shout-out to Thomas de Quincey, crawling fungi, red-litten windows, “laugh but smile no more”, coffin worms, creeping into the crypt to often, The Conqueror Worm, a foreshadowing, reasons for laughter vs. reasons for smiling, the hideous throng, Usher II by Ray Bradbury, premature burial, Buried (2010), The Death of Olivier Bécaille by Emile Zola, Weird Tales, Poe is a hilarious writer, punning and japing, Mad Trist by Sir Launcelot Canning, Dead Families 101, How To Repair Your Doomed House, The Man Who Collected Poe by Robert Bloch, wacky moments, The Cask Of Amontillado, deGrave wine, The Tomb by H.P. Lovecraft, Jervas Dudley as one of the Usher descendants, a lot more Poey, there are not a lot of sisters in Lovecraft, The Moon Pool by A. Merritt, The Moon Bog by H.P. Lovecraft, Edgar Rice Burroughs, comparing Poe to Lovecraft, The Narrative Of Arthur Gordon Pym Of Nantucket, The Dreams In The Witch House, the novella (short story) vs. the novel, it starts off as a horror tale, What The Moon Brings, Ireland, a little bit ushery, 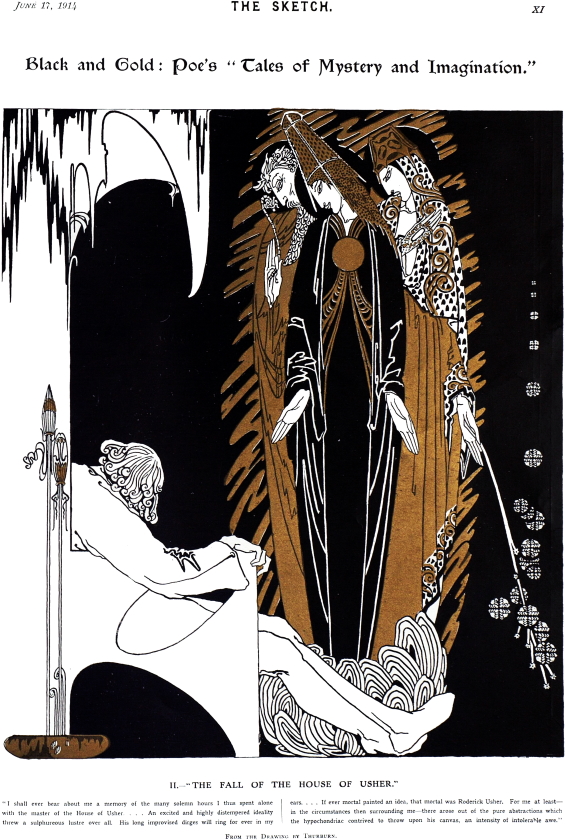