I only know Phill Jupitus from his appearances on Stephen Fry’s, I want to say game show?, QI. From that I gathered he was a comedian, but apparently he’s also a fan of steampunk. In any case he’s the host of this one off “factual” BBC programme about the phenomenon. It’s entitled Mr Jupitus In The Age of Steampunk. If you’ve ever encountered a person with flying goggles, clad in tweeds and clutching a mahogany laptop or brass smartphone on a chain, what’s the explanation? Phill Jupitus steps into an era where the 19th and 21st centuries charmingly collide, to investigate the time travelling cult known as Steampunk.

Travelling back to the steam-powered future, Phill discovers a cast of modern characters – engineers, scientists, writers, artists and inventors – taking their inspiration from the Victorian and Edwardian arts and sciences, and from the fiction of H.G. Wells.

“It’s still the early twenty-first century. The Victorian world, the Edwardian world carried on”, explains Ian Crichton aka Herr Doktor amongst an array of fantastical homemade devices: digital camera modified with rivets, brass-etched ray gun, steam pistol and a space helmet like that worn by Lionel Jeffries in The First Men on The Moon. “We’ve got steam-powered cars on the streets. We’ve got huge dirigibles flying to Japan”.

Steampunk speculates on an imaginary overlap between the 19th century and the present day. Phill investigates at a Steampunk convivial, The Houses of Parliament, on an x-ray ward, at a punk gig and in a shed in suburban Surrey.

I got the MP3 version via a torrent listed over on RadioArchive.cc.

Philip K. Dick’s novelette, We Can Remember It For You Wholesale, is a tale full of false memories, soulful wishes, and the planet Mars – all classic Dick themes. It’s hero, Douglas Quail, is a man who longs to visit Mars yet is shrewish wife denies him even the day-dream. But when he discovers that he’s actually already been there, as an agent for a sinister government agency, things start getting a bit confused. Is he really a deep cover Black-Ops assassin with suppressed memories and a false identity? Or is he just a sad shmendrik with delusions of grandeur? Here’s the editorial introduction, from the publication in Fantasy & Science Fiction, for We Can Remember It For You Wholesale. The article mentioned as being on “page 62” is by Theodore L. Thomas, a noted SF writer and prolific columnist for F&SF in the 1960s. Thoma’s article is based on another entitled “THE FOOD THEY NE’ER HAD EAT” which is available as a |PDF|. One audiobook version was recorded for BBC Radio 7, now called BBC Radio 4 Extra, and broadcast back in 2003. It’s available via torrent at RadioArchive.cc.

We Can Remember It For You Wholesale
By Philip K. Dick; Read by William Hootkins
2 MP3s via TORRENT – Approx. 64 Minutes [UNABRIDGED?]
Broadcaster: BBC Radio 7 (now called BBC Radio 4 Extra)
Broadcast: September 2003
Doug Quail lives in a future world of memory implants and false vacations. Doug wants to visit the planet Mars but after a mishap at a virtual travel agency, he discovers that he’s already been there. First published in Fantasy & Science Fiction, April 1966.

And, here’s the trailer for the remake of the movie of the story that Philip K. Dick wrote: 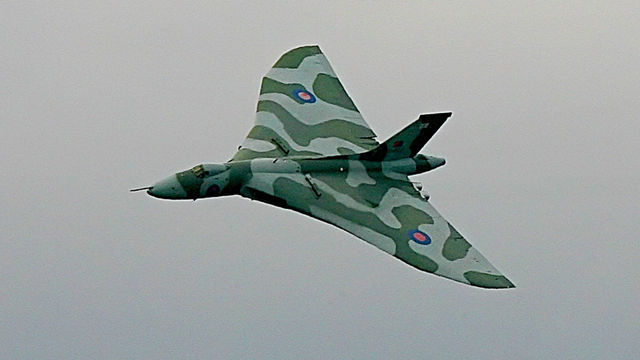 I first heard about Operation Black Buck after watching a Channel 4 broadcast in anticipation of the 30th anniversary (April, May, and June of 1982) of the Falkland War. Falklands’ Most Daring Raid was the “humorous, heroic story of how a Cold War-era Vulcan flew the then-longest-range bombing mission in history with a Second World War bomb that changed the outcome of the Falklands War.” It’s a great watch (and is available via torrent HERE).

And now, thanks to BBC Radio 4 (and RadioArchive.cc) there is as a companion to that doc. And it is a very satisfactory BBC Radio 4 dramatization too!

Like the Dam Busters and Doolittle raids, the story of Operation Black Buck strikes me as an inspirational engineering problem. A kind of wartime terrestrial Apollo mission, but done with 1950s technology.

Operation Black Buck was conducted from Ascension Island in the mid-Atlantic to the Falkland Islands as a part of the initial British response to the invasion of the Falkland Islands by Argentina. That 7,500 km distance required an stunning amount of mid-air refueling check out this diagram: Afternoon Drama: Operation Black Buck
By Robin Glendinning; Performed by a full cast
1 MP3 – Approx. 44 Minutes [RADIO DRAMA]
Broadcaster: BBC R4
Broadcast: June 5, 2012
During the Falklands War 30 years ago, the RAF staged the world’s longest bombing run, in an attempt to damage the runway at Port Stanley. Using ageing Vulcan bombers, crews flew a round trip of 8000 miles from Ascension Island to the South Atlantic. Such a journey required not just in-flight refuelling, but re-fuelling of the refuelling planes – a hazardous undertaking that had never before been attempted on such a scale.

In this drama, Robin Glendinning recreates the nail-biting adventure. Not only were the raids themselves difficult to pull off, but even getting the aircraft ready for the flights was a major task. Aviation museums across the world were raided for spares, and key parts retrieved from junkyards.

But there are those who question whether or not the operation was militarily useful – or whether or not the same job could have been done more effectively using planes attached to the naval task force. Was this really about war, or was it about the RAF trying to carve out a role for itself in a conflict that threatened to be entirely dominated by the Army and Royal Navy? And how successful were the raids anyway?

I got this show via torrent from our friends at RadioArchive.cc.

One of (if not the most) adapted novels in the history of cinema is The Hound Of The Baskervilles. I myself love the novel and have seen at least a half dozen screen adaptations. But the latest adaptation I’ve witnessed is my new favourite.

Bert Coules’ 1988 BBC Radio adaptation is absolutely fantastic. It keeps nearly every scene I like from the novel. Better yet, it’s use of sound, to both cut from scene to scene and to drive the action forward, is absolutely masterful. Audio drama of this quality is just that step above. It’s truly wondrous listening!

According to the notes on RadioArchive.cc (where I got it) this version has never been rebroadcast on the radio. That’s a big shame, it’s an absolute treasure!

Even more strangely this adaptation is actually the first of two separate Bert Coules adaptations of Hound done for BBC Radio.

The torrent is HERE.

The Hound of the Baskervilles
Adapted from the novel by Sir Arthur Conan Doyle; Performed by a full cast
2 MP3 Files via Torrent – Approx. 110 Minutes [UNABRIDGED]
Broadcaster: BBC
Broadcast: 1988 RadioArchive.cc, that wondrous torrent tracker for public radio programmes, is back online. I was getting worried!

Apparently the site was taken down at the request of the BBC. As one commenter pointed out, it’s a case of the ‘left hand isn’t sure what the right is doing’ – how often have we seen stories like THIS?

But, of all the comments, this was the sentiment I liked most:

Thank you all very much for the hard work you put in to running the site. It’s just a brilliant resource all together, and has brought hours of pleasure to my life. Very glad to have you back.

And to make it tangible I’ve just made a $25 USD donation.

If you haven’t yet checked out RadioArchive.cc, then do, it’s brilliant!

Mike Walker’s H.P. Lovecraft: The Young Man Of Providence is a 43 minute dramatized biographical broadcast that aired on BBC Radio 4 on September 10, 1983.

There’s currently a direct download of an MP3 available HERE and it’s also available over on RadioArchive.cc via |TORRENT|.

[also via Lovecraft eZine and HPLovecraft.com]