ROBERT BLOCH (1917 – 1994) An American writer, primarily of Crime, Horror and Science Fiction. Bloch wrote hundreds of short stories and more than a score of novels in several genres. His best know story is Psycho, upon which the Alfred Hitchcock film of the same name was based. Bloch was a student of H.P. LOVECRAFT, who acted as his literary mentor. Early Bloch stories sold to pulp magazines like Weird Tales. He was also a prolific screenwriter. Bloch was a recipient of the Hugo Award, Bram Stoker Award, and World Fantasy Awards.
Robert Bloch was involved in television, film and radio. The latter saw his stories adapted as radiod drama. In fact Bloch co-created and wrote scripts for a 1945 syndicated radio program entitled Stay Tuned for Terror. Many of the 15 minute programs were adaptations of his own pulp stories. Unfortunately, none of the thirty nine episodes of this 1945 series are extant.

This Crowded Earth
By Robert Bloch; Read by Gregg Margarite
12 Zipped MP3 Files or Podcast – Approx. 3 Hours 35 Minutes [UNABRIDGED]
Publisher: LibriVox.org
Published: March 05, 2009
Robert Bloch (1917 – 1994) was a prolific writer in many genres. As a young man he was encouraged by his mentor H. P. Lovecraft, and was a close friend of Stanley G. Weinbaum. He also wrote many screenplays including Hitchcock’s Psycho, and scripts for the original Star Trek. He received the Hugo Award, the World Fantasy Award, the Bram Stoker Award, and he is a past president of the Mystery Writers of America. Published in Amazing Stories in 1958, This Crowded Earth is a thriller set on an overpopulated Earth of the future.

Psycho
By Robert Bloch; Read by Kevin McCarthy
2 Cassettes – [ABRIDGED]
Publisher: Listen for Pleasure / Dh Audio
Published: 1986 / February 1999
ISBN: 0886464927
When the Bates Motel loomed up out of the storm, Mary Craine thought it was her salvation. The rooms were musty but clean, and the manager, Norman Bates, seemed like a nice enough fellow, if a little strange… Then Mary met Norman’s mother. And the butcher knife. The nightmare had just begun…

Psycho II: The Nightmare Continues
By Robert Bloch; Read by ???
2 Cassettes – [ABRIDGED?]
Publisher: Sunset Productions
Published: August 1992
ISBN: 156431019
Posing as his most recent murder victim, a nun, Norman Bates escapes the mental asylum where he has been incarcerated and begins yet another reign of terror, in a work read by Mike Steele and accompanied by music and sound effects.

The Living Dead / You’ll Catch Your Death
By Robert Bloch and P.N. Elrod; Read by Michael Page and J. Charles
1 Cassette – Approx. 90 Minutes [UNABRIDGED?]
Publisher: Stellar Audio; Volume 5: Horror edition (Brilliance Audio)
Publisher: August 1996
ISBN: 1567409709
The Living Dead, by Robert Bloch – as the underground movement heats up in Paris in WWII stage actor Eric Karon finds he is invaluable in his role of Count Barsac the vampire. His tomb is used as a hideout for important officials and their possessions. As karon envelops himself in the role, he finds that there is such a ting as playing a role too well…. You’ll Catch Your Death by P.N. Elrod – As Fleming is out driving by the beach he spots a scantitly clad woman running along the sand. Since the water is nearly frozen though, he finds this curious. He should have left well enough alone – he proceeds to get involved in a murder attempt that may claim his life as well. 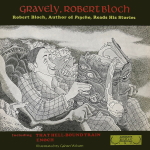 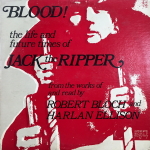 Tony Danza helps a time-traveling Arthurian knight fulfill his quest, but gets himself in a great deal of trouble with the modern day police as a result in this comic gem from the pen of Robert Bloch, author of Psycho and many other horror and fantasy classics.

One thought to “ROBERT BLOCH”