The concluding episode of Canadia: 2056 airs today on all CBC Radio One stations across Canada. Tune in and listen @ 11:30am or listen using the Streaming Radio Map. And, just one day prior to the conclusion Canadia: 2056 earned an “honorable mention” for the 2007 Mark Time Awards.

“An illegal upload adversely affects the computer. The Canadia finally reaches the planet Ipampilash, but Faverau and Pickens can’t agree on what to do. Anderson and Lewis take matters into their own hands when the captain is unable to answer the call of duty. Faverau comes across a Canadian on board the USS Pickens and brings them back to the Canadia. Canadia 2056, this morning at 11:30 (noon NT) on CBC Radio One.”

What will the ultimate fate of Canadia: 2056 be? We’ve got no idea. But Matt Watts has posted a bit of info to his site. Matt sez:

“Overall, I’m pretty happy with the quality of the writing. I think I managed to write a couple of great episodes (along with a couple of clunkers.) The two episodes that were co-written turned out great, and I’m glad I had Dave Tomlinson and Bryan Lee O’Malley to write them. I couldn’t have done it at all without Joe Mahoney as my story editor – Thanks, Joe. The cast and crew were fantastic to work with. The whole thing was a great ride, and I hope we get picked up for more. I left the story open ended and there’s nothing I’d like more than to do a second season.” 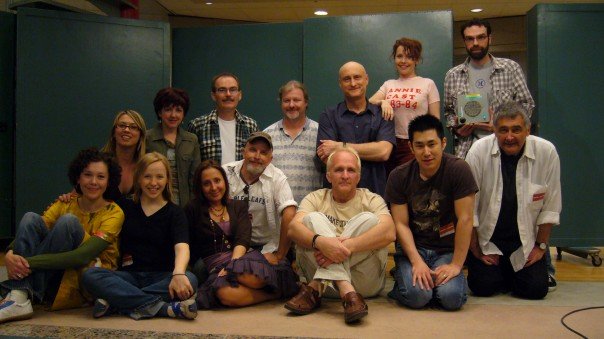 The series seems to have really struck a chord with listeners. One listener compared it with the original broadcast of The Hitchhiker’s Guide To The Galaxy, and I think that’s a fair comparison, Matt Watts is not unlike a Canadian Douglas Adams.

I’ve personally received several emails requesting places where previous episodes can be downloaded. Unfortunately I’m not personally able to help you with these requests. But nothing is stopping you from trading files yourselves.

Other than that, for those who missed episodes, or would like to hear the show again all I can say is that the show may be re-run in years to come, or like the two previous CBC SF series by Matt Watts, they may be released on CD. We’ll let you know when and where you can get Canadia: 2056.