This first one came out April First, but no foolin’ this one’s for real! A podiobook success story like no other – the first major print release from Scott Sigler is an audiobook! Random House is comparing Sigler’s technothriller,Infected (AKA Infection) to the works of Chuck Palahniuk, Michael Crichton, and Stephen King! Infected – Director’s Cut
By Scott Sigler; Read by Scott Sigler
9 CDs – 12 Hours [UNABRIDGED]
Publisher: Random House Audio
Published: April 1st 2008
ISBN: 9780739328859
Across America a mysterious disease is turning ordinary people into raving, paranoid murderers who inflict brutal horrors on strangers, themselves, and even their own families. Working under the government’s shroud of secrecy, CIA operative Dew Phillips crisscrosses the country trying in vain to capture a live victim. With only decomposing corpses for clues, CDC epidemiologist Margaret Montoya races to analyze the science behind this deadly contagion. She discovers that these killers all have one thing in common – they’ve been contaminated by a bioengineered parasite, shaped by a complexity far beyond the limits of known science. Meanwhile Perry Dawsey – a hulking former football star now resigned to life as a cubicle-bound desk jockey – awakens one morning to find several mysterious welts growing on his body. Soon Perry finds himself acting and thinking strangely, hearing voices . . . he is infected.

Also from Random House (and coming later this month)… 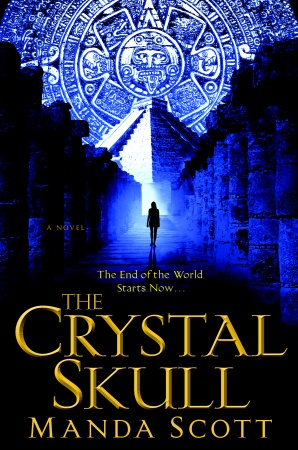 The Crystal Skull
By Manda Scott; Read by Susan Duerden
CDs – [ABRIDGED]
Publisher: Random House Audio
Published: April 15th 2008
ISBN: 9780385340106
In a spellbinding blend of history, myth, and science, a thriller that sweeps from the secrets of the Mayans to the court of a sixteenth-century queen to a shattering end-times prophecy.