An astonishing technique for recovering and cloning dinosaur DNA has been discovered. Now humankind’s most thrilling fantasies have come true. Creatures extinct for eons roam Jurassic Park with their awesome presence and profound mystery, and all the world can visit them—for a price.Until something goes wrong.…

I can’t believe how much I enjoyed this book. I guess I’ve always had my reservations because of what an impact the movie had on me as a kid. I was about 9 or 10 when the movie first came out and it blew my mind. As the book likes to point out, boys love dinosaurs and that was true.

As a side note, I’m loving how much my son (5 y.o.) loves dinosaurs. He knows so much more about them than I do, in fact his favorite is the Giganotosaurus, a dinosaur I learned existed from him. 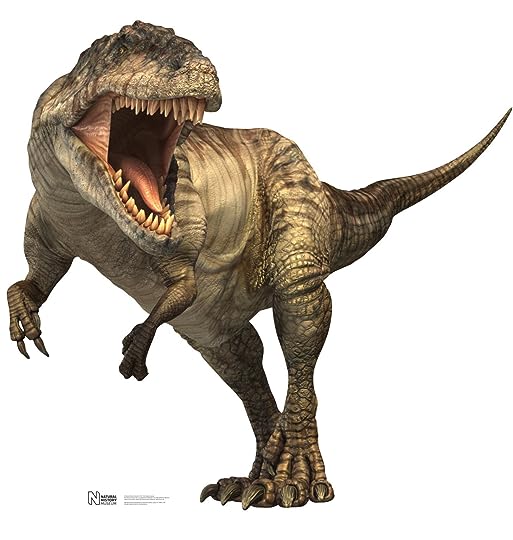 Now, I’ll be the first to admit my memory of of the movie is a tad hazy, but from what I do remember, the movie actually follows the book quite a bit, at least up until about 2/3 of the book where either my memory is bad or the books is completely different (oh and Grant loves kids in the book, which is … opposite). More than I would have guessed, which was not a lot.

There’s a little more detail to the initial attacks we see in the movie and it’s not quite as gruesome in parts (and much more gruesome in others). The girl gets attacked by the Compsognathus (little green dinos), or **”compys” as they’re known. **excuse my spelling, I listened to the audio and like Fox news, I don’t feel the need to fact check.

The park is just about ready to open and it’s time to get all the consultants together to make sure it’s on the right track. Thus, Grant and Sattler, Ian Malcolm, the attorney Jennaro, and a couple others are flown in.

Of course, nefarious doings are going on and a competitor wants in on the dinosaur action. In comes Dennis Nedry, who is pretty much spot on copied in the movie. Excellent job Wayne Knight. He’s pretty much built the entire IT system for the park and thus has quite a bit of control over pretty much everything. I don’t remember his involvement in the park being this extensive, but then again, I was 9. There’s a frikkin’ T-REX!!! 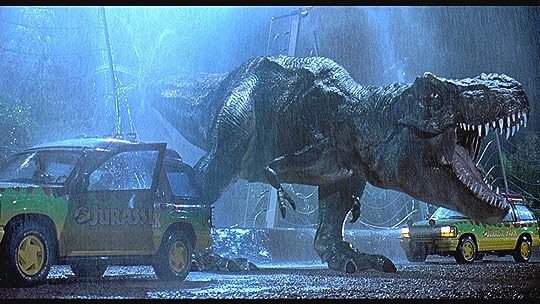 And it’s awesome. I had a blast listening to this book and Scott Brick is such a talented narrator, you don’t even notice him reading. It’s just pure story.

A couple *important* things I wanted to point out… some spoilers for the book:

1. The lawyer, Jennaro, is not as spineless as in the movie, does not get eaten while he’s sitting on the toilet by a T-Rex (okay, that was an awesome addition), and even saves the day at one point by pointing out law that doesn’t exist. (No, this sudden support for the lawyer has nothing to do with the fact that I have an Esq. on the end of my name … perish the thought) 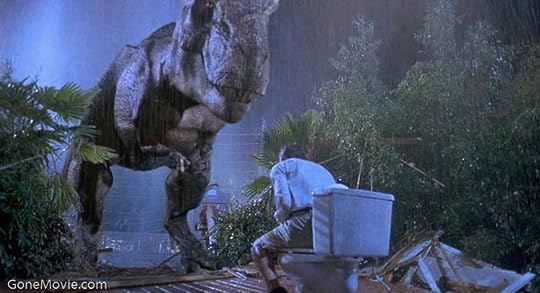 3. Ian Malcolm’s Chaos Theory should have been cut down like in the movie. There are a number of times he’s going off about it and you’re literally thinking, aren’t there dinosaurs around the corner about to eat them? Does anyone care about any theory at this time besides the theory of escaping dinosaurs? Still a great character, just weird timing of his rants about corporations and such, which I’m not disagreeing with.

4. So this book was published in 1990 and this book had maybe a total of 15 to 20 people at risk, not counting the rest of the world that could potentially be at risk by dinosaurs escaping. We’re talking people you’re honestly worried about dying or not throughout the book.

Jump to 2015, Jurassic World, and we’ve got an entire park open with thousands and thousands of people at risk. Does that say something about how our society’s penchant for destruction?

5. But seriously, back to Malcolm, Chaos Theory essentially comes down to – because dinosaurs are an unknown, and much like the weather – unpredictable – you’re all screwed and nothing will work right. And then Malcolm gloats. Even while dinosaurs are stalking him.

Now, the opposing argument in the book is that zoos exist so why can’t dinosaurs be kept in a zoo? My problem is that if everyone gave up because there was an unknown then we’d have just about nothing. People go forward with the unknown all the time. Many fail, but that’s how great success comes as well. I guess I’m saying I needed more to this theory and preferably when I can think about the theory and not when DINOSAURS ARE LITERALLY AROUND THE CORNER TRYING TO EAT YOU.

6. Jurassic Park gets lots of crap for providing false ideas as to what dinosaurs actually looked like (see raptors). While it’s true, if you ignore the story, it is explained. You know that whole science part toward the beginning, well they talk about only finding partial DNA and having to graft in DNA from other animals (which actually becomes a huge problem). This would lend toward dinosaurs that don’t actually look like they’re supposed to and I’m fine with that explanation.

I have to say, after 25 years, Jurassic Park really held up well. Lots of the communication issues would be the same problem nowadays because of the fact that they’re on a remote island that cell phones would be problematic on anyway. It helps that a book doesn’t have to actually reproduce computer screens so you can picture those as high tech as you want as long as you ignore the amounts of memory they mention. At least they’re in the gigabytes still.

And most of this I just point out because of how into the book I was. I really had a blast listening to Jurassic Park and I can highly recommend a reading of this classic. One of the few book/movie combinations where I can honestly say I loved both for their own reasons. Now, I need to go track down a copy of that movie. If only there were some online subscription service like Oyster for movies.