The SFFaudio Podcast #680 – Jesse, Paul Weimer, Maissa Bessada, and Will Emmons talk about The Man Who Sold The Moon by Robert A. Heinlein 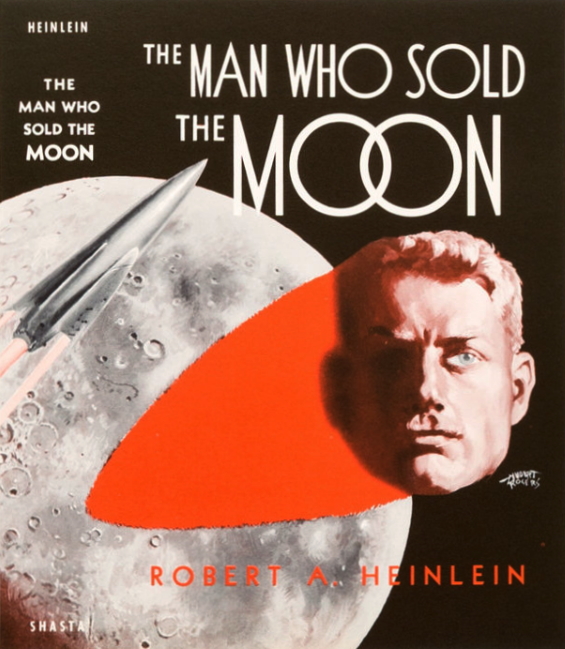 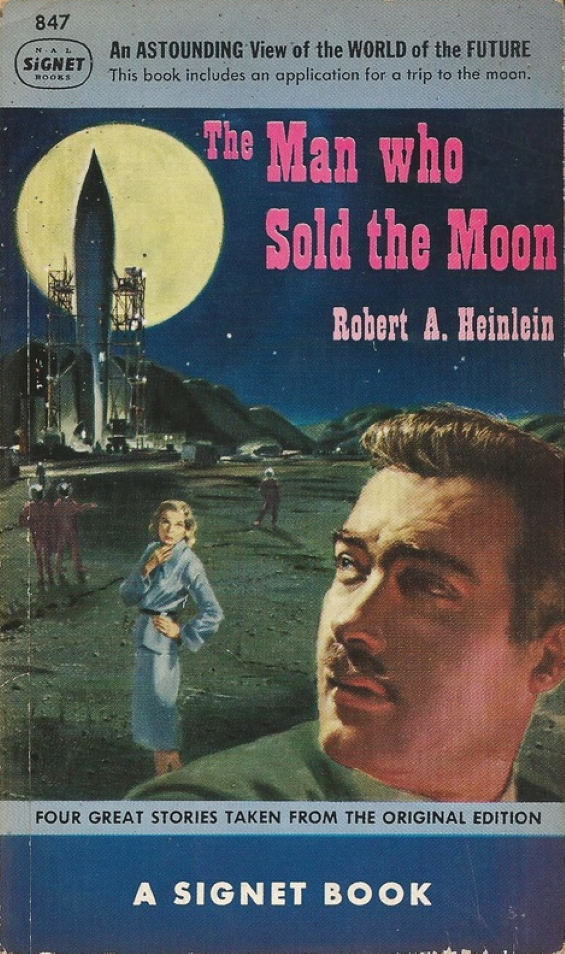 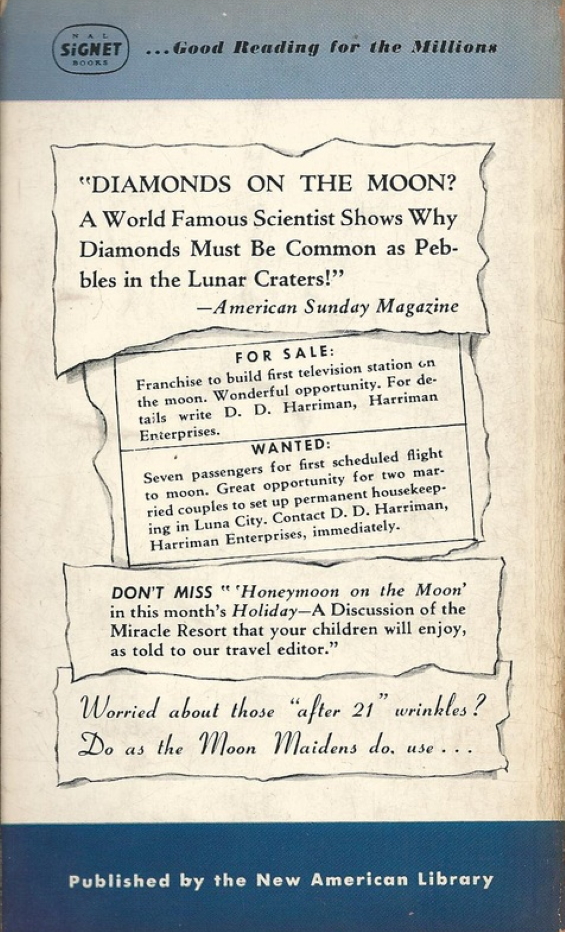 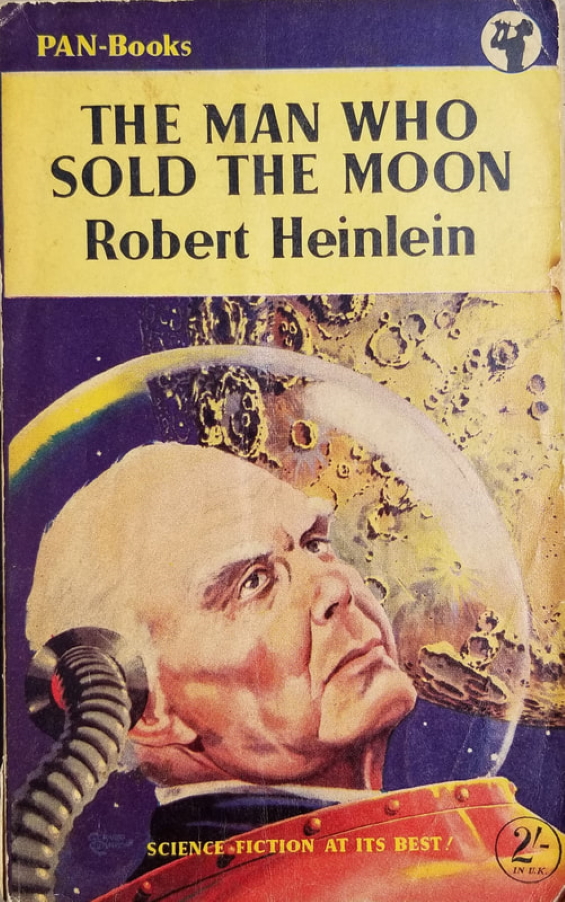 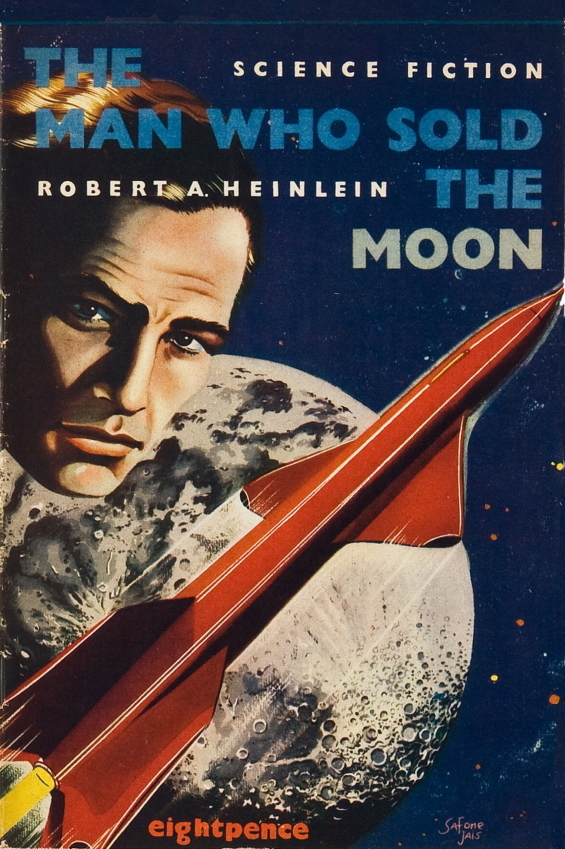 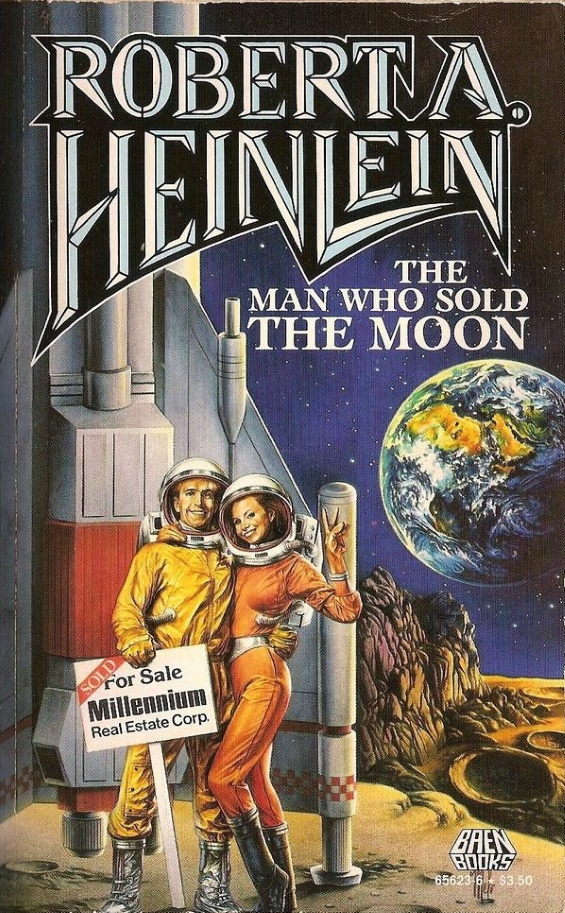 There are now more than 1,300 audiobooks currently available for download. To see the complete listing click HERE.

I placed an order for two MP3 audiobooks just a few days ago. I found it a pretty smooth process. The files downloaded very quickly and came in zipped folders containing well labelled and well ordered MP3s. Also very well done is the “My Bookshelf” section, which allows you to re-download titles you’ve already ordered. What Tantor has done here is take Audible.com’s good features and left out the terrible one – Tantor has no crippling DRM! The sun swings behind the world. Night engulfs him. The dull metal craft plunges through space, its portholes pale beacons containing the silhouette of a man, and the only other lights are the stars themselves.

This alternate history novel is a faithful depiction of the Soviet Union’s race against the United States to put a man on the Moon. The sad reality is that it never happened this way, but that doesn’t nullify a tremendously magnetic story of how it very well could have done. The viewpoint character is Yefgeni Yeremin an orphan of WWII, a fighter pilot and a Korean air-war ace. His story is as compelling a depiction of a quasi-Nitzchean overman as I’ve seen in fiction. Yeremnin is a more human, more plausible kind of Ayn Randian character – but he’s also hard to empathize with. He’s a man who can’t quite break free of his upbringing, his colleagues, his country, but who despite this achieves what must be viewed as the ultimate in overcoming. The Ascent of the title is not just that of a man from the surface of the Earth, but of mankind from Earth and that which came before. Just as birth is the obvious, but arbitrary line in the moral sand of personhood, so too is the actual landing of a human being on the surface of the moon.

Ascent starts with a shock, builds brilliantly during the Korean War scenes and then plateaus. Mercurio tells a powerful story – the first half of the audiobook absolutely riveted the headphones to my head. That which follows is engaging, but not as impactful. Perhaps the tale could have been told in another manner. Perhaps part of the problem is in the novel form itself. I wonder if it might not have been better, shorter – as a novella say. Yeremnin too is hard to take at this length – he is a hard man, from a hard world, with little in him other than will. The technical jargon that predominates his space voyage, while I’m certain accurate, is burdensome, and the problems that face the protagonist are less thrilling than those in the first half of the book. The end, when it comes, simply…. is. It isn’t wrong for the book, but it isn’t right either. It may be that this kind of tale, with this kind of character, is not actually tellable another way. Todd McLaren helps, he does Russian accented English but doesn’t overplay it – this is a matter of fact delivery. I hope Mercurio can find another topic within Science Fiction with as much passion as that which he put into Ascent, this was a tremendously compelling listen.

Tantor Audio has some very exciting Speculative Fiction titles on the horizon! First up, there is a simultaneous release of a new Harry Turtledove Alternate History novel, quite far out is the new Richard K. Morgan audiobook (o0f which we have absolutely no plot info) AND best of all there are THREE Isaac Asimov Mystery/Science Fiction classics coming! There are even more titles too!!!

Beyond the Gap
By Harry Turtledove; Read by William Dufris
12 CDs or 2 MP3-CDs – Approx 15 Hours [UNABRIDGED]
Publisher: Tantor Audio
Published: February 2007 (?)
ISBN: 1400103827 (CD), 1400153824 (MP3-CD)
“In this promising first of a new saga, alternate-history maven Turtledove (Ruled Britannia) depicts a Bronze Age society in transition. A growing gap in the glacier that has formed the Raumsdalian Empire’s northern border for millennia allows Count Hamnet Thyssen and Trasamund the jarl, of the nomadic Northern Bizogot, to become the empire’s Lewis and Clark. They and their entourage, which inconveniently includes Hamnet’s unfaithful ex-wife, Gudrid, depart the empire’s capital city, Nidaris, to explore what lies beyond the glacier and search for the fabled Golden Shrine. On the way, a formidable and attractive (if unbathed) Bizogot shaman, Liv, joins the expedition—and Hamnet under the animal hides. If the Raumsdalians and Bizogots don’t always get along, their culture clash is nothing compared to the threat they face on the other side of the glacier: the Rulers, a tribe of imperious, mammoth-riding warriors. A vivid setting and strong characterization bode well for future installments.”

Ascent
By Jed Mercurio; Read by Todd McLaren
7 CDs or 1 MP3-CD – 8 Hours 30 minutes [UNABRIDGED]
Publisher: Tantor Audio
Published: March 2007
ISBN: 1400103681 (CD), 1400153689 (MP3-CD)
Yeremin, a Soviet MiG pilot, rises from the privation of a Stalingrad orphanage to the heights of the cosmonaut corps. During the Korean War, as a member of an elite squadron, he shoots down the most American fighter jets—a feat that should make him a national hero, but because the Soviets’ involvement in the war is secret, Yeremin’s victories go unreported. When he is recalled from obscurity to join the race to the Moon, he realizes it is his chance for immortality.

Caves Of Steel
By Isaac Asimov; Read by William Dufris
7 CDs or 1 MP3-CD – 8 hrs 30 min [UNABRIDGED]
Publisher: Tantor Audio
Published: May 2007 (?)
ISBN: 1400104211 (CD), 1400154219 (MP3-CD)
A millennium into the future, two advancements have altered the course of human history: the colonization of the galaxy and the creation of the positronic brain. Isaac Asimov’s Robot novels chronicle the unlikely partnership between a New York City detective and a humanoid robot who must learn to work together. Like most people left behind on an over-populated Earth, New York City police detective Elijah Baley had little love for either the arrogant Spacers or their robotic companions. But when a prominent Spacer is murdered under mysterious circumstances, Baley is ordered to the Outer Worlds to help track down the killer. The relationship between Baley and his Spacer superiors, who mistrusted all Earthmen, was strained from the start. Then he learned that they had assigned him a partner: R. Daneel Olivaw. Worst of all was that the “R” stood for robot—and his positronic partner was made in the image and likeness of the murder victim!

The Society Of S
By Susan Hubbard; Read by Joyce Bean
8 Audio CDs or 1 MP3-CD – 10 Hours [UNABRIDGED]
Publisher: Tantor Audio
Published: May 2007 (?)
ISBN: 1400104262 (CDs), 140015426X (MP3-CD)
Ariella Montero is seeking the true identities of her mother and father—and of herself. She’s been taught literature, philosophy, science, and history, but she knows almost nothing about the real world and its complexities. Her world is one wherein ghosts and vampires commune with humans; where Edgar Allan Poe and Jack Kerouac are role models; where every time a puzzle seems solved, its last piece changes the entire picture.

The Naked Sun
By Isaac Asimov; Read by William Dufris
7 CDs or 1 MP3-CD – 8 hrs 30 min [UNABRIDGED]
Publisher: Tantor Audio
Published: June 2007 (?)
ISBN: 140010422X (CD), 1400154227 (MP3-CD)
A millennium into the future, two advancements have altered the course of human history: the colonization of the Galaxy and the creation of the positronic brain. On the beautiful Outer World planet of Solaria, a handful of human colonists lead a hermit-like existence, their every need attended to by their faithful robot servants. To this strange and provocative planet comes Detective Elijah Baley, sent from the streets of New York with his positronic partner, the robot R. Daneel Olivaw, to solve an incredible murder that has rocked Solaria to its foundations. The victim had been so reclusive that he appeared to his associates only through holographic projection. Yet someone had gotten close enough to bludgeon him to death while robots looked on. Now Baley and Olivaw are faced with two clear impossibilities: Either the Solarian was killed by one of his robots—unthinkable under the laws of Robotics—or he was killed by the woman who loved him so much that she never came into his presence!

The Robots Of Dawn
By Isaac Asimov; Read by William Dufris
13 CDs or 2 MP3-CDs – 15 hrs 30 min [UNABRIDGED]
Publisher: Tantor Audio
Published: July 2007 (?)
ISBN: 1400104238 (CD), 1400154235 (MP3-CD)
A puzzling case of roboticide sends New York Detective Elijah Baley on an intense search for a murderer. Armed with his own instincts, his quirky logic, and the immutable Three Laws of Robotics, Baley is determined to solve the case. But can anything prepare a simple Earthman for the psychological complexities of a world where a beautiful woman can easily have fallen in love with an all-too-human robot?