The SFFaudio Podcast #151 – Scott, Jesse, and Julie Davis talk, in the second of a six part series, about the books V, VI, VII and VIII of The Odyssey.

Talked about on today’s show:
We join Odysseus crying into the wine dark sea, it’s all about marriage (and homecomings), my wise Penelope, My Big Fat Greek Wedding, Captain Kirk of the Mediterranean, the Samuel Butler translation, Calyspo vs. Circe, Ogygia vs. Scheria, Nausicaa, the role of women in Ancient Greece, adornments to the men, Nausicaa will later marry Telemachus, Odysseus is always being gifts and then losing them into the sea, the LibriVox edition, Poseidon and the other gods are easily distracted, Demodocus may be Homer putting himself into the poem, telling the story from the middle outwards, Memento, a television show inside a television show (a story within a story), Inception, Ino, “oh myself”, an extra god (named “River”), animism, Shinto, does Athena actually seal Odysseus’ eyelids?, Ehren Ziegler’s Chop Bard podcast, rosy fingered Dawn (the goddess), does Dawn work on multiple planets, Apollo worship has really slacked off since Copernicus, crying like a woman, carrying an olive branch like a mountain lion, “tell the one about Odysseus”. 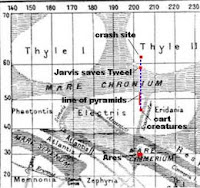 If the answer to those questions is “Yes.” Then we’ve got a great audiobook for you. Here are a couple of reviews, circa 1888, of The Frozen Pirate by W. Clark Russell:

“The most enthralling romance which Mr Clark Russell has written since The Wreck of the Grosvenor There has been no finer story of Antarctic adventure at once so thrilling so strange and so realistic In vivid beauty and effect there are passages transcending anything in The Wreck of the Grosvenor or in The Golden Hope and than this no higher praise could be given It did not need The Frozen Pirate to place Mr Russell indisputably foremost among all living writers of sea life but if there were any lingering doubt this romance would settle the uncertainty.” – Academy

“Mr Clark Russell has spun many a good yarn for the delight of landsmen and The Frozen Pirate will rank among the best of them. Vigorous, breezy and healthily exciting the story will be read with keen enjoyment by every one who takes it up.” – Scotsman

Amongst its more ardent fans are:

–Dr. John Watson of 221B Baker Street, who can be found reading an 1887 (or earlier) novel by W. Clark Russell in The Five Orange Pips: “Sherlock Holmes sat moodily at one side of the fireplace cross-indexing his records of crime, while I at the other was deep in one of Clark Russell’s fine sea-stories until the howl of the gale from without seemed to blend with the text, and the splash of the rain to lengthen out into the long swash of the sea waves.”

–H.P. Lovecraft. His biographer, S.T. Joshi, wrote: “Lovecraft had been fascinated with the Antarctic continent since he was at least 12 years old, when he had written several small treatises on early Antarctic explorers. At about the age of 9, inspired by W. Clark Russell’s 1887 book The Frozen Pirate, Lovecraft had written ‘several yarns’ set in Antarctica.”

And here’s a snippet from a 2002 SFSite.com review by Georges T. Dodds:

“The scenes on the pirate ship are quite gripping and the tension developed when the thawed pirate begins drifting into madness is also very well done. The horror elements are well handled without being over the top, the atmosphere Russell develops in his description of the frozen pirate ship does much more to ‘creep one out’ than any mere description of the dead bodies would have”

Yep, it has all that and a frozen pirate, quickly defrosted, too!

[thanks also to Nadine Eckert-Boulet, Jessi and Barry Eads]

I feel kind of silly posting this. It’s already on our EDGAR RICE BURROUGHS page. And, I’ve never read it. But the thing about great cover art is it makes you want to read the book. Just look at all the steampunky-looking goodness on this new cover.

Now read the description. With characters named “Deja Thoris of Helium” and “Thuvia, princess of Ptarth” it sounds like they were created in a fever dream of the Sleep Talkin’ Man.

Add it all up and what do you get?

Thuvia, Maid of Mars
By Edgar Rice Burroughs; Read by Scott Merrill
14 Zipped MP3 Files or Podcast – Approx. 5 Hours 21 Minutes [UNABRIDGED]
Publisher: LibriVox.org
Published: January 4, 2009
In this novel the focus shifts from John Carter, Warlord of Mars, and Dejah Thoris of Helium, protagonists of the first three books in the series, to their son, Carthoris, prince of Helium, and Thuvia, princess of Ptarth. Helium and Ptarth are both prominent Barsoomian city state/empires, and both Carthoris and Thuvia were secondary characters in the previous two books.

Do you prefer your lions cowardly?

How about your scarecrows?

I knew you did.

The Wonderful Wizard Of Oz
Based on the novel by L. Frank Baum; Adapted by Linda Marshall; Performed by a full cast
1 Broadcast – Approx. 1 Hour [RADIO DRAMA]
Broadcaster: BBC Radio 4 / Saturday Play
Broadcast: December 19, 2009 @ 14:30-15:30
When a tornado strikes her farmhouse in Kansas, young Dorothy is lifted to the magical world of Oz, where she embarks upon a perilous journey to find her way back home.

With Original Music by Olly Fox

First published in the USA in 1900, and constantly in print since then, L. Frank Baum’s novel of Kansas and another world is the first in a series of 14 books that have entered the public domain in the USA. Though there have been many adaptations – most notably the 1939 film, radio dramatizations have been few and far between.

Incidentally, TellTaleWeekly.org, a website I shamefully haven’t mentioned in a few years, has an excellent DRM-free audiobook version of The Wonderful Wizard Of Oz available for download (and it’s cheap @ just $6.00). |READ OUR REVIEW|

Audiobook fans who prefer the simplicity and immediacy of a LibriVox audiobook should also take note of the all public domain edition of The Wonderful Wizard Of Oz available for FREE over on LibriVox.org!

[Thanks to the man behind the curtain, Roy!]