The SFFaudio Podcast #316 – The Golden Man by Philip K. Dick; read by Mike Vendetti. This is an unabridged reading of the story (1 hour 15 minutes) followed by a discussion of it. Participants in the discussion include Jesse, Tamahome, Paul, and Mike.

Talked about on today’s show:
1954, The God Who Runs, bad titles, Next, Homo Aureus, The Man In The high Castle (TV series), hashtag marketing, an episode of The Twilight Zone, the film adaptation, Knowing, a working train-wreck, the main character has no sapience, autism, the diner scene, not just an exposition scene, the fake salesman, a lady with 8 boobs, shades of Total Recall, he’s looking for Jews, the secret police, the DCA are the secret police, the locals protect the mutant, Philip K. Dick:

“Here I am saying that mutants are dangerous to us ordinaries, a view which John W. Campbell, Jr. deplored. We were supposed to view them as our leaders. But I always felt uneasy as to how they would view us. I mean, maybe they wouldn’t want to lead us. Maybe from their super-evolved lofty level we wouldn’t seem worth leading. Anyhow, even if they agreed to lead us, I felt uneasy as where we would wind up going. It might have something to do with buildings marked SHOWERS but which really weren’t.” 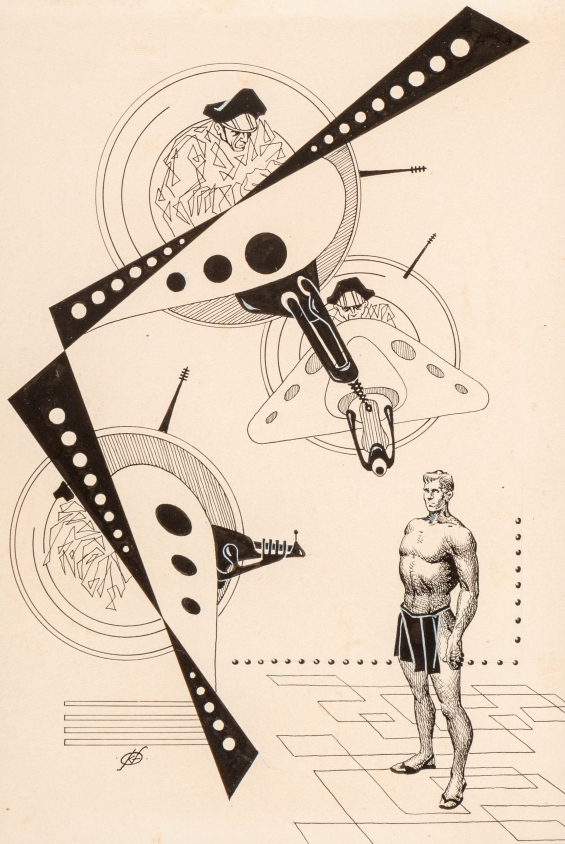 The SFFaudio Podcast #083 – Jesse talks with Jeremy Keith of HuffDuffer.com about his website. HuffDuffer can turn any MP3 file on the web into a podcast! HuffDuffer lets you make your own curated podcasts and share them with the world.

Talked about on today’s show:
HuffDuffer.com, turning loose mp3 files on the web into podcasts, “the benefit of the website happens when you’re not at the website”, maybe planning ahead just isn’t popular?, the HuffDuffer extension for Firefox, Mozilla Firefox vs. Google Chrome, Bookmarklet, “HuffDuffer is the perfectly developed website”, website design, “all software evolves until it becomes an email client” (or Facebook), interacting with iTunes, “it just works”, you can HuffDuff any audio extension (no video thanks very much), audio vs. video, the stigma of audio (and radio), adactio.com (Jeremy Keith’s website), SalterCane.com, BBC, CBC, tagging your podcasts, the Science Fiction tag on HuffDuffer, Sage an RSS catcher for Firefox, the HuffDuffer people page, the HuffDuffer tag cloud page, the use of machine tags, flickr.com, the Philip K. Dick tag, each tag makes its own feed, the Orson Scott Card Selects podcast feed, get satisfaction from HuffDuffer, HuffDuffing computer voiced MP3 files (please don’t), exploring HuffDuffer as a social network, ClearLeft.com and Jeremy Keith’s profile there, the philosophy of website design, how to design a website for every browser, designing SFFaudio’s design, inertia of website design and designers, “website development is the most hostile environments”, three things have changed the internet for me: 1. podcasting 2. HuffDuffer 3. RSS readers, consuming the content the way you want, the Readability bookmarklet, Safari 5, sustainable business models, Dark Roasted Blend, why isn’t HuffDuffer HUGE?, you aren’t competing on the web, niche websites are empowering, what happens if Jeremy Keith gets hit by a bus?, the demise of websites, is Wikipedia too big to fail?, the further demise of websites, “feature creep“, you don’t buy a domain name (you rent it), the Seeing Ear Theatre story, Archive.org, the Science Fiction mindset, The Wayback Machine, the death of Geocities was a tragedy for the future archaeologists of the web, Isaac Asimov’s Foundation, A Canticle For Leibowitz by Walter M. Miller, Jr., Anathem by Neal Stephenson, The Long Now Foundation, we need servers on the moon, bury archive.org under the Sea Of Tranquility, Carl Sagan, the Voyager record (it’s the longest of the LPs), reconstructing the phonograph 10,000 years down the road, does Science Fiction make you smarter? Jeremy Keith’s answer: “Only Science Fiction fans can be smart.”

Posted on March 1 at The Fix: Short Fiction Review is the latest Rocket Science column, which covers 1960 – 1961.

Audio versions of Hugo winners from those years:

1960:
Short Fiction: “Flowers for Algernon” by Daniel Keyes
I couldn’t find an audio version of the novelette version, but the novel version (which later won a Nebula Award) is available from Recorded Books.

Novel: Starship Troopers by Robert A. Heinlein
There are two versions of this – one from Blackstone Audio and one from Recorded Books. See Jesse’s review of both of them for the full scoop.

1961:
Short Fiction: “The Longest Voyage” by Poul Anderson
This one was included in a Dercum Press collection called No Truce with Kings. |SFFaudio Review|.

Novel: A Canticle for Leibowitz by Walter M. Miller, Jr.
Amazon lists an out-of-print version from Books on Tape, and Wisconsin Public Radio produced a 13 part audio drama for NPR, which you may be able to find.


1962:
Short Fiction: The “Hothouse” series by Brian W. Aldiss
I couldn’t find this one on audio.

Novel: Stranger in a Strange Land by Robert A. Heinlein
Blackstone Audio has an unabridged production, read by Christopher Hurt.

Over the holiday, I started a new column at The Fix Online. It’s called “Rocket Science”, where I’ll be reading and reviewing Hugo Award winners in the various short fiction categories. I started a similar thing on a short-lived blog I had called SFFreader. This one’s a bit more structured – I’ve got deadlines, and I’m going through them in a logical order. I sure enjoy doing it! The first column covers 1955 – 1956 and was posted on January 1.

The stories covered in that column were:
“The Darfstellar” by Walter M. Miller, Jr.
“Allamagoosa” by Eric Frank Russell
“Exploration Team” by Murray Leinster
“The Star” by Arthur C. Clarke

I know of no audio version of “The Darfstellar“.

“Allamagoosa” can be found on audio in humbly titled anthology The Greatest Science Fiction of the 20th Century, which is available from Audible.com.

An audio version of “Exploration Team” was produced by Dercum Audio in 1986.

Time to update our Hugo winners on audio page! Lots of titles have been produced since we put that page together.

My Audiobook Fix column will continue, but will not be a regular feature. If I’ve got some short fiction audio to talk about, I’ll write it up and get it to them, but the column won’t appear monthly.