The SFFaudio Podcast #313 – Jesse, Julie Davis, Seth, and Maissa continue their journey through The Lord of the Rings by J.R.R. Tolkien with a discussion of Book II “The Ring Goes South” (aka the second half of The Fellowship Of The Ring).

Talked about on today’s show:
Many meetings; Elrond’s powerpoint at the council; Bilbo’s demands for lunch (after missing his first and second breakfasts); the science fiction info dump; Council of Elrond’s unfeasibility in today’s publishing world; council is a series of chained short stories; a whole bunch of new characters; the rhythm and pacing of Tolkien’s storytelling; the protracted timespan of the novel; crotchety Bilbo; Caradhras and the “jaw-cracker” Dwarven tongue; Sam as the mediating character; Bill the Pony; dreams and The Wizard of Oz; the inevitability of Frodo’s quest; the dreams of Boromir and Faramir; Boromir has something to prove; Boromir’s complex relationship with Aragorn; the one walkers set against the nine riders; Boromir is Gondor-centric and doesn’t see the big picture; nuclear weapons as a modern analogy for the ring, Mordor = Nazi Germany, Gondor = Russia, Canada = The Shire; Canada’s refusal of nuclear power; the importance of choices in the story; Saruman of Many Colors; “he who breaks a thing to find out what it is has left the path of wisdom”; subverting readers’ expectations; “I will take the ring, though I do not know the way”; the ring and addiction; Galadriel’s long battle with temptation; Caradhras again, the anthropomorphic mountain; The Mirror of Galadriel and the choice to look; Teleport = teleportation + pornography; Tolkien’s letters, and Galadriel is not the Virgin Mary; Galadriel’s soul gaze–Boromir’s response: “this is bullshit!”; Frodo’s relationship with Galadriel as fellow ring bearers; more dubious analogies: Gandalf (or Isildur) as Eisenhower; the raw deal the Stewards get in Minas Tirith; Sam’s always excluded from the meetings; Rivendell and Lothlórien’s competing bed and breakfasts; Galadriel’s gifts; The Lord of the Rings as modernized Viking sagas; Babylon 5 is Lord of the Rings in spaaaaaaaaaaaaaace!; Jesse has seen everything; the Moria dungeon crawl; the Lovecraftian tentacle monster; how did Gollum enter Moria; Dungeons and Dragons vs. the Tolkien estate; wolves; the reappearance of “chance”; Frodo’s perilous sturgeon Amon Hen; repeated references to star- and moonlight; the strange nature of Elf magic; a digression about bears, bees, honey, and wolves; the Elven cloaks vs. Harry Potter’s invisibility cloak; the nature of the other rings; race conflicts in Middle Earth and the fairness of blindfolds; the film’s vulgarization of dwarves; the poetry of Middle Earth; the complexities of a multilingual world; “nom de traveling”; black swans on the Great River; Jesse is a “philosophically-trained Elvish dude”; white swans and symbolic logic; not many big predators in Middle Earth; Romantic ideas of nature; vegetarians and vegans in Middle Earth; the slippery slope of vegetarian logic; orcs in Lord of the Rings vs. goblins in The Hobbit; George MacDonald’s Goblin Princess; the etiology of the orcs; Sauron’s exploits in Númenor (read: Atlantis or Ultima Thule) before the ring; Robert E. Howard’s Conan is an Atlantean; multiple readings; what are the rest of the dwarves up to?; bosses and minibuses in Moria; Legolas, Gimli, and intercultural stress in Middle Earth; looking forward to The Two Towers; Maissa is still on board as a first-time reader. 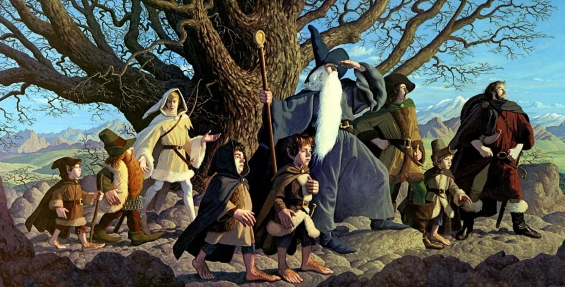 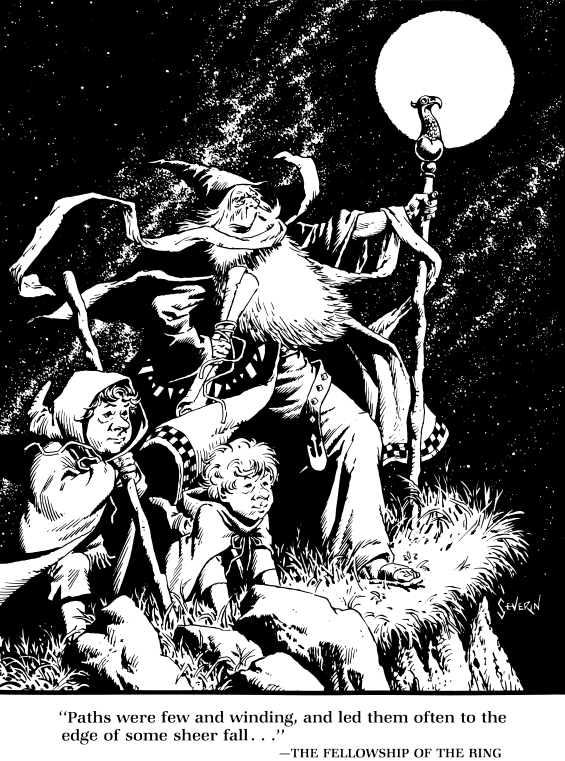