The SFFaudio Podcast #487 – Jesse, Maissa Bessada, and Julie Davis talk about Citizen Of The Galaxy by Robert A. Heinlein

Talked about on today’s show:
Astounding September to December 1957, a juvenile, Julie’s favourite Heinlein, Starship Troopers, really subtle, themes!, the prison on the moon, “I’m tired of being told your philosophy”, reconsidering, The Moon Is A Harsh Mistress, the computer, it’s on THE MOON!, so good, lectures, Maissa’s first time, Glory Road, crazy stuff, how gently, grossly obsessed, handled deftly, serialized, magazines back then, magazines suck today, magazines have been on the wane, the promise, so cool, not written for children, Double Star, looking up and remembering stuff, Heinlein’s worldbuilding, three major cultures, Jubulpur, the Free People, and Earth, the Hegemony, little drop ins, the planet of the squid people, reading into Earth’s history, launching his imagination, because of its alienness, what strikes you, the ride, all those incarnations, a blank slate, the unspoken premise, slavery, how free is anybody, deeply entrenched within the text, Jesse never sees themes, no themes, that word: “FREE”, and that was the freest time he had ever known, straight out of Kim by Rudyard Kipling, he ended it the same way, the thing that makes you free, I’m going to finish your work, the two priests and the monk and the military officer, his heirship, the Free Traders are the horse dealers of this world, thoroughly embedded in the culture that he’s in, the responsibilities grow, the ending section is boring and businessy, getting a handle, coming back to Pop, he would have joined the military again, reconstruct and deconstruct, reading every Heinlein book, maybe its these Dell books, reading a ton of Philip K. Dick, reading life or listening life, PKD characters are always talking about chamber music, writing those crazy books, being super-enthusiastic about it, in Heinlein’s books, his early reading influnced his own writing, really obvious, when Thorby gets on the Sisu, what Heinlein did when he was in the Navy, mechanical computers, exactly what his job was, classic who sunk my battleship, shooting nukes instead of canon, paralyzing beam, that esprit de corps, making it a family, we’re making it a matriarchy, the other thing he’s obsessed with is manners (in a way that no other author is), no normal decent person would, the gas-lighting grandparents, slavery in Canada, the underground railroad (was 30 years), between the American Revolution and the American Civil War, Oliver Wiswell, fleeing Tories, slaves in New France, it’s cold up there, slavery is still a reality, Libya’s slave market, Blackbirding, fruit plantations of the Pacific, indentured servitude for six years, Nate And Hayes (1983), an action adventures, Raiders Of The Lost Ark, Tommy Lee Jones, non-Frakis, Suomi, the Finnish word for Finnish, they can’t see it, putting scabs on himself, getting pissed off, making slavery look ok, the whole theme, supporting fascism, chicken hawk politicians, a thoughtful book, guiding you like a teacher, being wise, heavy handed?, the movie of Starship Troopers is a parody of the Starship Troopers the book, militarism is something worthy of mockery, we gotta take it serious, every time he changes jobs and culture, a new kind of unfreedom, philosophical pacifist, pacifism in opposition to militarism, what Heinlein is always coming back to, the grandparents are a slave to the money, what’s going on with their ships?, did or do the grandparents know?, so removed, are they that dense, the uncle knows, a disagreement about the ending of the book, did the uncle set up the parents?, he is the baddie of the book, willing to do anything to keep his power, he clearly has a lot to hide, a yacht with three passengers and no cargo, this is the exact plot of Netflix’s Iron First, “hey white kids kung fu is cool!”, political correctness doesn’t care about facts or logic, Danny Rand’s return to the estate, somebody at Marvel read this book?, lawyer characters, its going to cost you a fortune!, words of wisdom, talking to an experienced mechanic, is he going to marry his cousin?, they’re on the path for it, the career he needs, a person cant run out on responsibility, being so devoted to freedom…, what do you mean by slavery, being under the whip, Paul is a slave of Christ, that wisdom from the anthropologist, she’s fantastic, fun stuff, when Baslam is dead, he’s shortened, his words come back, he literally comes back, and so does grandmother, “citizen”, mmmhhhm!, the Sargonese nine worlds, end slavery by other means, India, caste, “levels of responsibility”, let me tell you better than you know, I’ve got scars on my back, the value of an open mind, how big is this book, it feels huge, so well packed, it feels breezy, all one character’s POV (with a few exceptions), age 4 or 5 or 6 to 19 or 20, Baslam looks at the boy, a hunted animal, opinions or endorsements of former owners, Jesse is going to blow everyone’s mind, Sisu came into popular North American parlance during the Winter War, 300,000–340,000 vs. 425,000–760,000, 2,514–6,541 tanks vs. 32 tanks, 3,880 aircraft vs. 114 aircraft, the Soviet Union won WWII, 27 million Russians died in WWII, Sisu expresses their natural character, the word that explains Finland,

The Finns have something they call sisu. It is a compound of bravado and bravery, of ferocity and tenacity, of the ability to keep fighting after most people would have quit, and to fight with the will to win. The Finns translate sisu as “the Finnish spirit” but it is a much more gutful word than that. Last week the Finns gave the world a good example of sisu by carrying the war into Russian territory

how Thorby acts at the end, just sign this thing, end use license agreements and terms of service, implied interactions with Grandmother, a whole novel or novel series hidden within just that line, bringing him into the family, a puddle of blood formed on the deck, your blood is now in the steel, sympathetic magic, he was now part of the ship, seeing how this is lived out, why does Baslam buying Thorby?, unmutated earth ancestry, he needs an assistant, many other lots, the whip marks and the price, he is literally buying a slave, he threatens to manumit him, “don’t manumit me, pop!”, Virginia Heinlein never bore any children, fertility treatments, all they could do was practice, the Heinleins never adopted, these juvenile books express a longing, he’s always the old man, interesting transgender issues, I Will Fear No Evil, a Missouri military guy, a free thinker, our Glory Road show, Heinlein should be handed out to everybody, Heinlein would have been a great father, slaves purchased for sexual purposes, this could be creepy, it’s not creepy at all, he’s mother and father to the boy, a touching book, very maternal for a dude, Baslam’s motivation, for no more children to be like Thorby, all the little hungry Thorbys, the big picture, you turn into the uncle, Heinlein is really good at the big picture, philosophy, circumstance, here are their skeletons, he never makes sequels, we make the sequels in our own heads, Thorby’s escape, the uncle is the undoing of Thorby’s family, giant stories we build ourselves, loquacious or voluble, the standard Heinlein asshole character, running around Bombay, where’d you get that scarf?, “I inherited it.”, that lesson is paralleled, how to get Thorby’s identity, when Heinlein is in the military, make it happen anyways, those kinds of lessons, lecturing people about morality, why Heinlein why?, no particular action, we’ve been taught, he’s trying to protect the kid, stealing from the beggar bowl, the ripples that effect somebody else, a true story we see expanded upon with every new level that he hits, Heinlein is more subtle here than in his other books, Mother Shaum, is she a brothel owner?, a parallel to Kim, the only time he has a mother, advisor, grandmother, one big strange family, more of the behind the scenes development, the nice note, indicating vs. preaching, the People (the Finish fleet of Viking trading ships), super-rich, potlatch style, so much prestige!, amazing cool culture, they’re racists!, from the anthropologists POV, Captain Krause, eating the soup, so good, real science fiction, anthropological science fiction, their name means the people, we all understand each other, SFFaudio is the people for that, right here this is our little spaceship, the trading ground, at the gathering, Jesse’s gonna lay out his stuff on this grass, their ability to turn Fraki off, admonished immediately, raiding neighboring communities for slaves, a path to one of the group, not the chattel slavery at the beginning of the book, evil slavers, the hope that was held out, Julie also heard that In Our Time episode, American slavery, Roman slavery, the business model, expressing the cultures, examining it, there’s nobody more anti-slavery than Heinlein, that’s “problematic”, Baslam’s fight to stop slavery, the ghost that haunts the whole book, Rudbecks, a giant evil state corporation, slavery is preferable to genocide, prison industrial complex slavery, people start wars for slaves, a more pleasant vs. preferable alternative to genocide, integration was hated by a lot of white folks, Harriet Beecher Stowe, Lincoln, a book about slavery that isn’t about American slavery, Paul I hope you’re listening, why everyone should be reading Heinlein, literal starships, a book about a concept and anthropology (not technology), my other father, the way to find justice is to be fair with other people and not care how they treat you, calm things down, the judges, the justices, draw nigh and ye shall be heard, a lot of witnesses, the uncle’s daughter was named Leda, does it mean anything in this context, his swan body, Thorby is The Ugly Duckling and so is Baslam, pure of heart, the book ends with Thorby picking up another father, just in a way that Baslam was just, Stranger In A Strange Land, a great fondness for one particular kind of lawyer, using the weapon of the law to get justice, another wonderful person to showcase, how fatherly, looking at some pretty girls, back to Kim, the same tiny family, a good book, here’s one, a good story is hard to find. 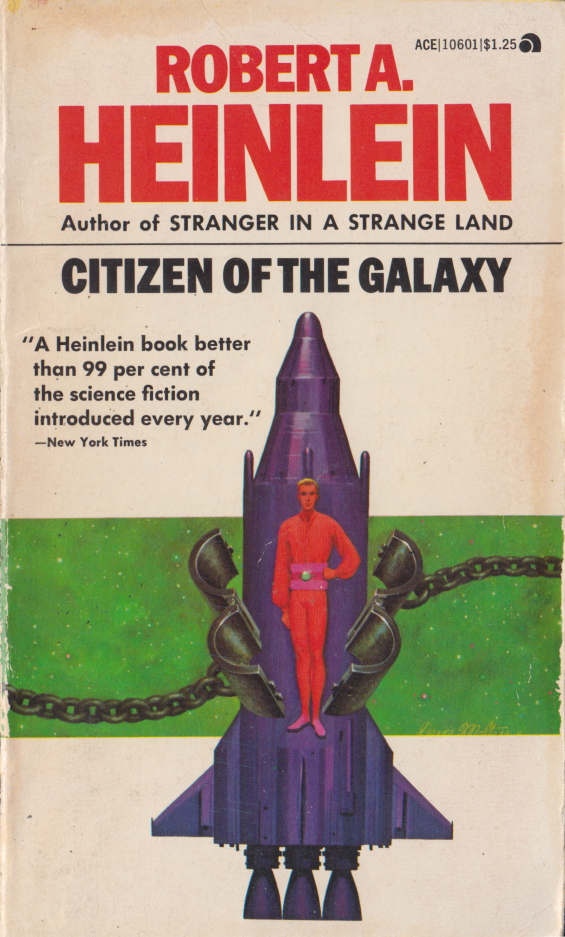