Talked about on today’s show:
The Drowned World audio drama, kinda familiar, original novella version, Science Fiction Adventures, #24, January 1962, the song the guy sings, the note that he writes at the end, Crash, High-Rise, Empire Of The Sun, The Concrete Island, WWII, The Wind From Nowhere, The Burning World, The Crystal World, people turning into crystals, Star Trek, a lack of water vs. too much water, Imperial occupation of China, Shanghai, everybody who wants a little piece of China, a mini Hong Kong, extract value out of China, a psychology guy, psychoanalysis, mining his own psyche, such a Marissa book, the draining of the sea, the subconscious, horror, dreams, the New Wave stuff, the character’s mind is disintegrating, if it had been written today, not-really an environmental novel, climate fiction, not dwelling on the sins of mankind making it happen, going south, a metaphor of going into the future or going into the past, re-create what we had, unknown and scary, go south, a kid growing up during the Japanese occupation, the adults are not useful, a kid on his own, the imagery of the title, the Swastika and the Sun, an image of a blind guy with burnt leg stumps, he can still see the light of the sun, it isnt just about an environmental disaster, poor hard SF, Kim Stanley Robinson, exactly what this book isn’t, stepping away from the didactic, exploring different themes, he’s a product of a different era, Frederik Pohl in the new wave, much more like Philip K. Dick, he doesn’t start with a constitution, this is that, taking the leash off, Dangerous Visions, Harlan Ellison, write what you want to write, how Weird Tales started, railroad, saucy and spicy fiction, science fiction, stories that didn’t fit, British SF, Arthur C. Clarke, its basically Annihilation [by Jeff VanderMeer] done way differently, ontogeny recapitulates phylogeny, you come out of the cave with a four iron, that all happens inside you’re mom, cup full of pond scum, the tadpole, pre-frogs, humanity is retrogressing, the Earth has gone through these new stages, not super-sciencey, this isn’t a climate disaster book, its not a disaster, civilization vs. nature, a rejection of the militarization of mankind to fight against this, look at full highways, this is progression, Kurt Vonnegut’s Galapagos, self-satisfied and smug, Heinlein’s ideas, I got your point and I don’t like it, rutting and barking seals on the beach, hitting to close to a truth, I prefer not to dwell there, devolution, that’s our next stage of our evolution, anything like that in SF can’t really be science, Protector by Larry Niven, we’re a baby version of another species, completely bullshit, pointing to a number of things that we have, if this happened here are the massively horrible consequences, Ballard is mining his own psychology vs. making a wry point, all the guns, Thompsons, 45 automatic, WWII era weapons, something that probably actually happened to our author, hauntingly real, there were two bullets left, a very dark story with a bright sun, the way the British dealt with their colonies, we’re coming to save you, you have to fight to the last man, they abandoned Singapore, they abandoned Shanghai, a horrible revelation, lied to be Churchill, people running away from the military, the plot here is very dreamlike, the description of everything, we are left to infer, biological records, unread reports, meaningless, worthless, fake science, what they’re actually willing to pay for is the industrial equipment, the pirates, we have to hunt them down, keeping control of what the beliefs are, a helluvalot of censorship, passed censorship, reality is being censored, the media that we have, Russian State Affiliate Media, doesn’t say that for CNN, official candidates for American offices, a perennial problem, most people don’t THINK about it, a lot of WWII imagery, maybe there’s one in the South?, it’s London, right?, one of the characters grew up in London, a dream book, fever dreams, those images really haunt him, why the dreams of the characters are affected, very odd, super-stylized, very poetic, The Recognition, The Assassination Of John Fitzgerald Kennedy Considered As A Downhill Motor Race, Billennium, The Concentration City, a The Library Of Babel approach to the universe, overpopulation, looking for space, being free, Los Angeles, where the homeless people live, the whole of the story takes place,

A car accident leaves Robert Maitland, a wealthy architect in the midst of concealing his affair with a colleague, stranded in a large area of derelict land created by several intersecting motorways. Though surrounded by motorists and within sight of large buildings, Maitland is unable to escape the median strip and must struggle for survival. Along the way he encounters other inhabitants of the median strip, which he comes to call “The Island,” including a teenaged prostitute who hides out in an abandoned air-raid bunker and an acrobat who became mentally handicapped in an accident and now salvages car parts for bizarre shamanic rituals. He learns to survive by scavenging discarded food from littering motorists, and eventually comes to think of the island as his true home. Conflicts ensue with the other inhabitants and before long Maitland is struggling to determine whether he was truly meant to leave the island at all.

not a normal SF book, no aliens, just homeless people, and that’s the book, a very Philip K. Dick style of move, take the domestic and externalize it, you make your boss a robot, so interesting and totally weird, that’s how its happening inside of him, why did this crash happen?, why did this war happen?, there’s no meaning there, fighting against forces so much bigger than us, the sun, it gives you life, it does it relentlessly, its godlike, staring at the sun, this smoke filled world of California, this little red patch behind the smoke cloud, following that sun, that weird red spot in your vision, sometimes stuff like this is happening and there’s nothing an individual can do about it, the gender of the sergeant, the fear of the scientific description of what is happening to the world, the iguanas are taking over, the concern about the blacks, the quadroons, voodoo-stuff, reverse colonialism, there’s some random racism, this is what it was, this is how it is, or this is how it could be, artificially constructed vs. organically constructed, we’re having a positive effects, make things more attracting, Paul is mutating, Jesse is not obsessed with guns, guns are pieces of technology that have power, one of the things you can note in the film that you can’t in the book, Vietnam era M-16s, that choice is a message, its about Vietnam, the people who made the movie made deliberate choices, a cast to all of this, colt 1911, American WWII hardware, personal defense weapons, it gets very specific where it wants to, you can’t just have a blocky shape that is weapon-ish, Jesse doesn’t think VanderMeer is trying to process trauma in Annihilation, same hauntings, dislikes the world as it is, the Ritz on the beach, wades off into the swamps, why leave the message?, a key passage, am moving south, at last he tied the crutch to his leg again, a second Adam searching for the forgotten paradises of the newborn sun, only the word rain is missing, something added in the middle, editorial introduction in Science Fiction Adventures, it looks great, this is pretty sweet, everything is falling apart, it smells too, Only the tops of the world’s great cities remained above sea level…, Civilization ended when the earth’s atmosphere changed slightly, return to the ocean depths, dinosaurs, I’m deserting, abandoning the salvage operation, we’re gonna rebuild civilization!, bones, this growing isolation and self-containment, a major metamorphosis, a careful preparation for a new environment, let’s get rid of all this stuff, the character names are meaningful, Cairns, it fits with the ending, Colonel Riggs, Doctor Bodkin, Beatrice Doll, Dante, that’s all she does, being still and expressionless, the sublimated world, Light Years And Dark edited by Michael Bishop, dedicated to Philip K. Dick, famous for being very good at writing, John Sladek, The Nine Billion Names Of God by Carter Scholz, The Cabinet Of Edgar Allan Poe by Angela Carter, the full Swiftian extent, Ralf 4F, Hugo Gernsback, Electrical Experimenter, Solar Shoe Salesman by Chipdip K. Kill, Stan houseman, like Karen and me, the racing movement of an autistic child, The Sublimation World by J.G. B, frond of zygote, the one he always dreamed about, pterodactyls honked overhead, a hot purple sunset, a peculiar loyalty to the human species, the Mirror of Xanadu, the sun had been getting dirty, a bead belt he made in Scouts, a bottle of hair oil, the Jurassic past, why should he drink dew?, pterodactyl guano, red silk mandarin pajamas, don’t be a bloody fool man!, the terminal terminal, he captured the writing style and the psychology, this is that story, he captured it in three pages, those are the things he is obsessed with, why are two shoe companies the only things left on Earth, Bored Of The Rings, parody recapitulates phylogeny, The Best Of J.G. Ballard, the whole dreamlike quality, the experience, Lost, influenced a lot of writers, re-reading it is like remembering a dream, Annihilation is definitely derivative of The Crystal World, Alex Garland, what role did J.G. Ballard’s work play?, an office bureaucracy story, was Ballard cultivating the effect or a result or a combination of both?, passionately in love with nature and the environment, Florida parks, under the fear is love, people who bought this book, Frameshift by Robert J. Sawyer, Ballard as the weird, the New Weird, the diving into the building, the Greenwich observatory, 20th century famous Irish authors, poets, the Province of Avalon, Ferryland, the BBC adaptation,

As a child, they could not keep me from wells
And old pumps with buckets and windlasses.
I loved the dark drop, the trapped sky, the smells
Of waterweed, fungus and dank moss.
One, in a brickyard, with a rotted board top.
I savoured the rich crash when a bucket
Plummeted down at the end of a rope.
So deep you saw no reflection of it.
A shallow one under a dry stone ditch
Fructified like any aquarium.
When you dragged out long roots from the soft mulch
A white face hovered over the bottom.
Others had echoes, gave back your own call
With a clean new music in it. And one
Was scaresome, for there, out of ferns and tall
Foxgloves, a rat slapped across my reflection.
Now to pry into roots, to finger slime,
To stare, big-eyed Narcissus, into some spring
Is beneath all adult dignity. I rhyme
To see myself, to set the darkness echoing. 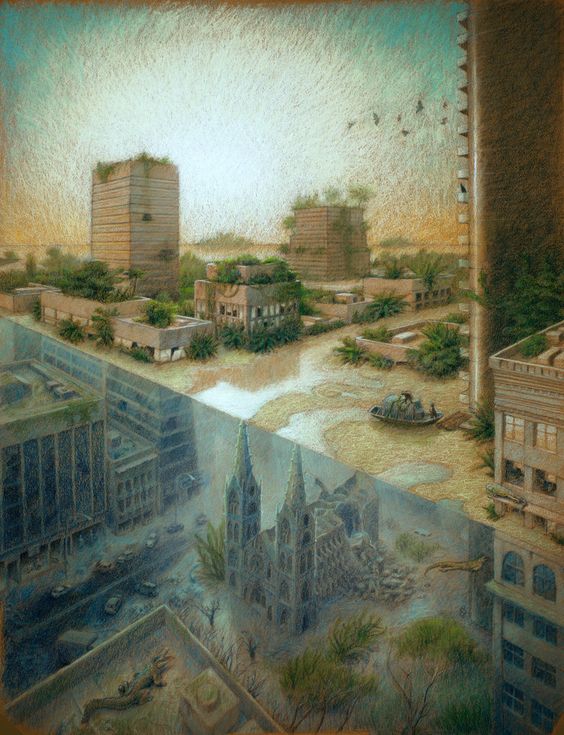