Scott D. Farquhar from Prometheus Radio Theatre has written in to claim Star Surgeon by Alan E. Nourse, one of the titles from our first SFFaudio Make An Audiobook Challenge! Scott is aiming to finish it by the end of February, he says it should be completed by March at the very latest!

Here’s the original 1959 bookjacket copy to get you intrigued:

When Dal Timgar, of all in his medical class, was denied assignment to a general practice patrol ship going out from Hospital Earth to serve the medical needs of the Galactic Confederation, it seemed to him that his eight years of study in the great medical center of the galaxy had ended in failure. He had worked hard and stood at the head of his class, but Dal was different from his medical colleagues in one important way. Born on a planet of a distant star, he was the first son of an alien race to attempt to become a qualified physician of Hospital Earth. Dr. Thorvold Arnquist, a power in Earth’s medical council, is determined that Dal Timgar shall have an equal chance with his Earth-born classmates to prove his skill as a physician and to earn his rank as Star Surgeon. He succeeds in getting Dal assigned, under protest, to the patrol ship Lancet, where Dal is faced with the full responsibilities of a patrol physician as well as the hostility of some of his crewmates. As the Lancet responds to calls of all kinds on planets of distant and unknown star systems, Dal’s skill and judgment as a surgeon are tested to the utmost. But it is not until he is confronted with a dreadful decision, which he alone must make, that Dal faces the final test–a test that will determine once and for all whether he is ever to become a Star Surgeon.

And here is our, now traditional, inspirational art: 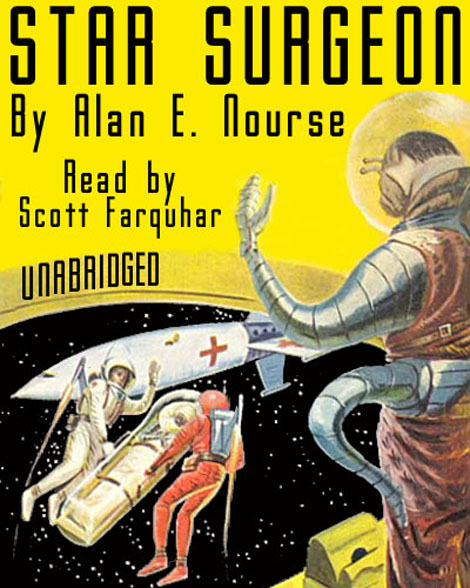 I’m really looking forward to hearing this one Scott!