Audio Renaissance starts a bold new series, and at 30 hours long so will you be…

Off Armageddon Reef
By David Weber; Read by Oliver Wyman
25 CDs – 30 hours [UNABRIDGED]
Publisher: Audio Renaissance
Published: January 2007
ISBN: 1427200653
Humanity pushed its way to the stars—and encountered the Gbaba, a ruthless alien race that nearly wiped us out. Earth and her colonies are now smoldering ruins, and the few survivors have fled to distant, Earth-like Safehold, to try to rebuild. But the Gbaba can detect the emissions of an industrial civilization, so the human rulers of Safehold have taken extraordinary measures: with mind control and hidden high technology, they’ve built a religion in which every Safeholdian believes, a religion designed to keep Safehold society medieval forever.

What’s next for Michael Crichton? Yes…

Next
By Michael Crichton; Read by Dylan Baker
CDs – [UNABRIDGED]
Publisher: Harper Audio
Published: November 2006
ISBN: 006087306X
Is a loved one missing some body parts? Are blondes becoming extinct? Is everyone at your dinner table of the same species? Humans and chimpanzees differ in only 400 genes; is that why an adult human being resembles a chimp fetus? And should that worry us? There’s a new genetic cure for drug addiction—is it worse than the disease?The audiobook also includes an interview with Crichton!

Written by a 15 year old, who sold it to the movies! Now here’s the true test of his success, the audiobook… 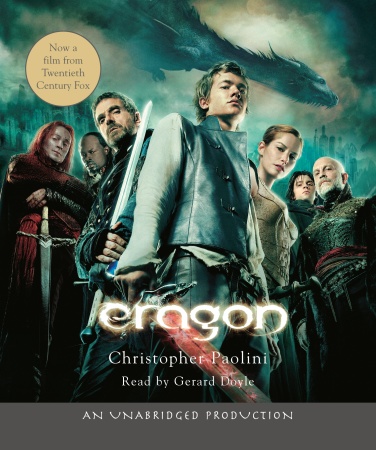 Eragon
By Christopher Paolini; Read by Gerard Doyle
CDs – [UNABRIDGED]
Publisher: Random House Audio
Published: October 2006
ISBN: 0739330942
Fifteen-year-old Eragon believes that he is merely a poor farm boy—until his destiny as a Dragon Rider is revealed. Gifted with only an ancient sword, a loyal dragon, and sage advice from an old storyteller, Eragon is soon swept into a dangerous tapestry of magic, glory, and power. Now his choices could save—or destroy—the Empire.

The Sky People
By S.M. Stirling; Read by Todd McLaren
12 CDs or 2 MP3-CDs – 15 hours[UNABRIDGED]
Publisher: Tantor Media
Published: January 2007
ISBN: 1400103452 (CDs), 1400153458 (MP3-CDs)
The first of a series of alternate-history tales based on a brashly entertaining premise: that in the 1960s, Russian and American space probes to Mars and Venus revealed not the arid worlds of our reality, but the colorful Mars and Venus of old pulp Science Fiction adventure. In The Sky People, it’s 1988, the Cold War is still raging, and Marc Vitrac has been assigned to Jamestown, the US Commonwealth base on Venus, near the great Venusian city of Kartahown. But all is not well. There is also a Russian base on Venus. Outside the bases is a wilderness swarming with sabertooths and dinosaurs—and lost races of people who seem to be human. An even greater mystery than lost races awaits Marc—as well as a danger that may well threaten the entire human race.

The Chief Designer
By Andy Duncan; Read by Jared Doreck
2 CDs – 132 Minutes [UNABRIDGED]
Publisher: Infinivox
Published: 2006
ISBN: 1884612547
An Alternate history novella that won the Theodore Sturgeon Memorial Award. This story, an alternate history masterpiece, as told from the point of view of Korolev, the “Chief” who managed the most crucial years of the secret Soviet space program, and his assistant and eventual successor, Aksyonov. The story spans from World War II, when Korolev was released from a prison camp to design rockets, to 1997 and the Mir space station.

Blackstone continues their release of Heinlein classics! this time with narration by Spider Robinson…

Ross Jenkins, Art Mueller, and Morris Abrams are not your average high-schools students. While other kids are cruising around in their cars or playing ball, this trio, known as the Galileo Club, is experimenting with rocket fuels, preparing for their future education at technical colleges. Art’s uncle, the nuclear physicist Dr. Donald Cargraves, offers them the opportunity of a lifetime: to construct and crew a rocket that will take them to the moon. Cargraves believes their combined ingenuity and enthusiasm can actually make this dream come true. But there are those who don’t share their dream and who will stop at nothing to keep their rocket grounded.

Plug plug! I’m reliably informed this novel will be complete very shortly, download the first 2/3rds immediately and for free thanks to podiobooks.com…

Badge Of Infamy
By Lester del Rey; Read by Steven H. Wilson
15 MP3s – [UNABRIDGED]
Publisher: Podiobooks.com
Published: December 2006 – January 2007
Status: In Progress
Daniel Feldman was a doctor once. He made the mistake of saving a friend’s life in violation of Medical Lobby rules. Now, he’s a pariah, shunned by all, forbidden to touch another patient. But things are more loose on Mars. There, Doc Feldman is welcomed by the colonists, even as he’s hunted by the authorities. But, when he discovers a Martian plague may soon wipe out humanity on two planets, the authorities begin hunting him for a different reason altogether.

Already reviewed, but a new release nonetheless – is it the first audiobook created on a dare (?)…

The Green Odyssey
By Philip Jose Farmer; Read by Mark Nelson
10 MP3s or 10 OGG Vorbis files – 6 Hours 6 Minutes [UNABRIDGED]
Published: December 2006
Publisher: LibriVox.org
Alan Green is a space traveler stranded on a barbaric planet. He’s been taken as a slave and made a consort to an insipid and smelly queen. His slave-wife, though beautiful and smart, nags him constantly. He’s given up hope of ever returning to Earth when he hears of two astronauts who have been captured in a kingdom on the other side of the planet, and sets out on an action-packed journey on a ship sailing across vast grasslands on rolling pin-like wheels in a desperate scheme to save them and return home.