The SFFaudio Podcast #401 – Celephaïs by H.P. Lovecraft, read by Gordon Gould. This is a complete and unabridged reading of the short story (16 Minutes) followed by a discussion of it (by Jesse, Paul Weimer, and Wayne June.)

Kuranes was not modern, and did not think like others who wrote. Whilst they strove to strip from life its embroidered robes of myth and to show in naked ugliness the foul thing that is reality, Kuranes sought for beauty alone. When truth and experience failed to reveal it, he sought it in fancy and illusion, and found it on his very doorstep, amid the nebulous memories of childhood tales and dreams.

so Lovecraft, reality ain’t pretty, always in fantasy, consciousness and objective reality, Jason Thompson comic book adaption, detail and attention, London, Yeasto and Beefo, Thomas Shap, gleefuly smashing a cat, opiates, a hashish man, the anonymity of Kuranes’ dream visage (in Jason Thompson’s rendering), Understanding Comics, wearied and wizened, a board game, an amazing adaptation, the page 8 sequence, the valley of Ooth Nargai, where form does not exist, a violet coloured gas, compass and protractor, manga style, hot air balloons, toward distant regions where the sea meets the sky, the domes are the same shape as the balloons, The Thing On The Doorstep, a script of imagery, going deep into the story, spending weeks in just 19 minutes, Fungi From Yuggoth, Dreamland-like,

There were great steppes, and rocky table-lands
Stretching half-limitless in starlit night,
With alien campfires shedding feeble light
On beasts with tinkling bells, in shaggy bands.
Far to the south the plain sloped low and wide
To a dark zigzag line of wall that lay
Like a huge python of some primal day
Which endless time had chilled and petrified.

I shivered oddly in the cold, thin air,
And wondered where I was and how I came,
When a cloaked form against a campfire’s glare
Rose and approached, and called me by my name.
Staring at that dead face beneath the hood,
I ceased to hope—because I understood.

The Gardens of Yinand from Celephais:

One night he went flying over dark mountains where there were faint, lone campfires at great distances apart, and strange, shaggy herds with tinkling bells on the leaders; and in the wildest part of this hilly country, so remote that few men could ever have seen it, he found a hideously ancient wall or causeway of stone zigzagging along the ridges and valleys; too gigantic ever to have risen by human hands, and of such a length that neither end of it could be seen. Beyond that wall…

it’s a dream but it is also real, Kubla Khan by Samuel Taylor Coleridge, a teetotaler, far more fascinating is the man himself, at points in his life, his dreams live on, eighty years later, immortality, he’s alive for a lot more people than he was when he was alive, horrifying vs. a slow sad tragedy, reflecting H.P. Lovecraft’s life, uncompromising, attitudes towards money, lies and untruths, up-selling, The Diary Of Alonzo Typer, William Lumley, a Thomas Shap character himself, the pathetic people who tell lies about their own life experience in order to make life more tolerable, the last paragraph, played mockingly, Trevor Towers, the purchased atmosphere of extinct nobility, offensive brewers, The Great Gatsby, that resentment, so tragic, so awesome, the two images of Trevor Towers, thinness of reality, and the neighbouring regions of dream, his eye, the naked ugly reality, he’s killed himself, you’re out king!, The Coronation Of Mr. Thomas Shap by Lord Dunsany, tongue in cheek, ironic, to persuade customers, a more compromised Lovecraft, a dignity of nobility, your everyday fella, particularity imaginative, a fable, don’t let it effect your work, living on the skeleton of his ancestry (or he’s a writer), tweeting dreams, the writer’s life,

I cannot tell why some things hold for me
A sense of unplumbed marvels to befall,
Or of a rift in the horizon’s wall
Opening to worlds where only gods can be.
There is a breathless, vague expectancy,
As of vast ancient pomps I half recall,
Or wild adventures, uncorporeal,
Ecstasy-fraught, and as a day-dream free.

It is in sunsets and strange city spires,
Old villages and woods and misty downs,
South winds, the sea, low hills, and lighted towns,
Old gardens, half-heard songs, and the moon’s fires.
But though its lure alone makes life worth living,
None gains or guesses what it hints at giving.

there’s that wall again, the wall as representative of the line between life and death, Ex Oblivione, they’re all dream-quests, “rift”, how the words associate with one another, all the abysses that Lovecraft talks about, The Strange High House In The Mist, a god having lunch, being thrown off the Earth, and yet…, a gate, a void, astral projection, the only way to the dream world (and space), super resonant, that’s great!, the wall over which the imagining and expectancy of what could be, that alone makes life worth living, embracing the fact you’re going to be extinct, that depth is unplumbed, a “problematic depth”, A Voyage To Arcturus by David Lindsay, wanting to be an astronomer, going on night walks, it’s isolating, he’s walking alone here, the “rift”,

Faith had urged him on, over the precipice and into the gulf, where he had floated down, down, down; past dark, shapeless, undreamed dreams, faintly glowing spheres that may have been partly dreamed dreams, and laughing winged things that seemed to mock the dreamers of all the worlds. Then a rift seemed to open in the darkness before him, and he saw the city of the valley, glistening radiantly far, far below, with a background of sea and sky, and a snow-capped mountain near the shore.

But three nights afterward Kuranes came again to Celephaïs. As before, he dreamed first of the village that was asleep or dead, and of the abyss down which one must float silently; then the rift appeared again, and he beheld the glittering minarets of the city, and saw the graceful galleys riding at anchor in the blue harbour, and watched the gingko trees of Mount Aran swaying in the sea-breeze.

Once every year, in autumn’s wistful glow,
The birds fly out over an ocean waste,
Calling and chattering in a joyous haste
To reach some land their inner memories know.
Great terraced gardens where bright blossoms blow,
And lines of mangoes luscious to the taste,
And temple-groves with branches interlaced
Over cool paths—all these their vague dreams shew.

They search the sea for marks of their old shore—
For the tall city, white and turreted—
But only empty waters stretch ahead,
So that at last they turn away once more.
Yet sunken deep where alien polyps throng,
The old towers miss their lost, remembered song.

a sunken city, the city waits for them too, I don’t like it when people give me presents, faking it, for a minute or two, in that moment, Wayne always appreciates more cash, The City In The Sea by Edgar Allan Poe, Lo! Death has reared himself a throne, J.R.R. Tolkien, no Usher-ness, Little Princess Mee, Shap = Shaper (dream) or shop, profound, where the sea meets the sky, “Faith had urged him on, over the precipice and into the gulf, where he had floated down, down, down”, and “Endlessly down the horsemen floated, their chargers pawing the aether as if galloping over golden sands; and then the luminous vapours spread apart to reveal a greater brightness, the brightness of the city Celephaïs, and the sea-coast beyond, and the snowy peak overlooking the sea, and the gaily painted galleys that sail out of the harbour toward distant regions where the sea meets the sky.”, a dream written down, keep reading the same story over and over again, Paul’s map (or depiction) of Celephais, Campaign Cartographer, inspired to art, the abandoned village is Innsmouth, a river running through it, a completely inverted vision, ancient atavism vs. beauty and a new golden age, steering into The Dreamquest Of Unknown Kadath, Carter once knew Kuranes in waking life, Carter knows me, the more muscular adventurer, all around the Dreamlands, the infection of dream travel, Kuranes’ last name is Trevor, a hit of this hookah, back to reality, back to childhood, The Dream-Quest Of Vellitt Boe by Kij Johnson, exiled to reality, better off in the real world, the reverse, Wayne June’s audiobooks for Thomas Shap and Celephaïs, a dream fiction collection, have them all together, at your terrible job, retire to the sea-coast and go for a sleep walk, read it on your own. 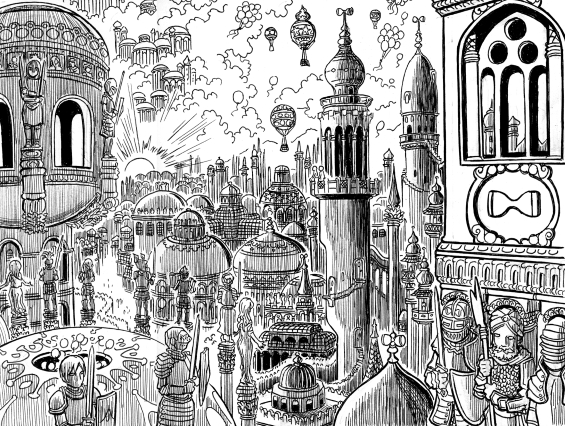