The SFFaudio Podcast #581 – The Silver Key by H.P. Lovecraft; read by Martin Reyto (for Legamus.eu). This is an unabridged reading of the short story (34 minutes) followed by a discussion of it. Participants in the discussion include Jesse, Paul Weimer, Marissa VU, and Mr Jim Moon

Talked about on today’s show:
Weird Tales, January 1929, The Silver Key, a cameo by a bearded Gnorri, a cameo appearance, with The Silver Key on the mind, a whole theory, symmetry, flying vehicle, each of the wings represents an aspect of human existence, left on the dreaming room floor, Jesse had not read it, some theories from the conscious world, dream theories, a chronology, up for debate, 1919, The Statement Of Randolph Carter, The Dream-Quest Of Randolph Carter, cyclical element, a time loop, a time travel story, changes his life for the better, a better life, go with it, carter on the second loop, E. Hoffmann Price’s suggested sequel, living concurrently, a sequel, violently disliked by readers, which story was the most popular, no mention, willing to think it was a bad story, the HPLHs podcast episode, Kenneth Hite, a lot like a lot of other Lovecraft stories, The Tomb, outright references, the Great Cypress Swamp, who is the narrator of this story?, now it is agreed, the narrator is a friend of his, another dreamer, I shall ask him when I see him, a certain dream city, there are twists of time and space, the narrator himself is a dreamer, a mysterious Indian swami, a conclave of interested parties, an elderly eccentric of Rhode Island, Ward Phillips, still alive in another dimension, reigned as king, living a dream while you’re reading it, a personal crisis story, super sad, he’s become disenchanted with reality, disenchanted with his dreamworld, he’s philosophizing in fiction, the idea of a man whose pretending to act like he fits into a society, trapped in the is role, well meaning philosophers, I had this amazing dream, let’s get some Freud going here, maybe they know what theyre talking about, stamping out his imagination, he puts away his childish things, don’t be silly, a cultural shift to modernism, Clark Ashton Smith, fashions abruptly changed in the 1920s, esoteric and opulent prose, a brutalist style, poems about the automobile, we don’t have time for fairy glades and flights of fancy, early cubism, we need a tonne of grey and it ought’nt look like anything, a man out of time, after WWI, devoted to science, the over-extension of science to snuff out imagination, even knowing science takes away the beauty of it, science vs. fantasy, in stark contrast, two sides to Lovecraft, the dreamquest stuff and deep time and space, they’re doing so correctly, we’re fooling ourselves, the grinding of the wheel (grinds slow but fine), the depths of space and the depths of time, the womb-like dreamlike childhood innocence, reading his poetry, trying to reconcile the two, is Leslie S. Klinger going to do a third book?, where did this all come from?, its beautiful, a weird connection between the softness of the moss and the harsh reality of the gears, novels of the normal of the mainstream, well received by the empty herd?, a mimicing of the mimetic fiction, burning his manuscripts, his relationship with Weird Tales, Farnsworth Wright, give us your favourties, the more controversial shit you put into a show the more comments you get, disliked or not understood?, take your frogmen, Wright had a chip on his shoulder, The Loved Dead, Julia Morgan recorded one, the drawings Clark Ashton Smith did, a lot more sex in his stories…, The Evil Dead (1981), a guy on twitter (Bobby Derie), a disdain for the flesh, Case from Neuromancer, meat that gets you into cyberspace, playing PUBG, how funny Lovecraft is, Reading, Short And Deep, The Dream, Maurice Winter Moe, masturbation scenes, Unda; Or The Bride Of The Sea, if you go to YouTube, Jonathan Swift, very mocking poems, she gets out the chamber pot, smells and sounds, Strephon And Chloe, such cleanliness from brow to heel, no noisome whiffs, to make maid’s water, what poetic strains, he’s got stuff, remember that Swift is a minister, Hymen, Strephon had long perplexed his brains, to keep them sweet, the narrator intruding, the nymphs may smell it, can such a deity endure, lighting shot from Chloe’s eyes, forbid your daughters guzzling beer, in evil plight, what causes wind, think what evils must ensue, carminative and diuretic, fortune still assist the bold, even lambs fly the butcher, incredibly raunchy, a 1731 wedding toast, Strephon and Celia, The Lady’s Dressing Room, the kind of humour Lovecraft appreciates, not nice but funny, turning his own mockery on himself, how shallow, those pompous ideas, far less worthy of respect, some deep dark sad stuff, hitting us right where we live, in this way he became a kind of humorous, holy shit, in the first days of his bondage, the gentle churchly faith, only on closer view, the owlish gravity of sordid truth,

In the first days of his bondage he had turned to the gentle churchly faith endeared to him by the naive trust of his fathers, for thence stretched mystic avenues which seemed to promise escape from life. Only on closer view did he mark the starved fancy and beauty, the stale and prosy triteness, and the owlish gravity and grotesque claims of solid truth which reigned boresomely and overwhelmingly among most of its professors; or feel to the full the awkwardness with which it sought to keep alive as literal fact the outgrown fears and guesses of a primal race confronting the unknown. It wearied Carter to see how solemnly people tried to make earthly reality out of old myths which every step of their boasted science confuted, and this misplaced seriousness killed the attachment he might have kept for the ancient creeds had they been content to offer the sonorous rites and emotional outlets in their true guise of ethereal fantasy.

making me very sad, Celephaïs, Lord Dunsany, they’re real tied together, why this so painful, he’s doing a Philip K. Dick, he’s writing about himself, strongly autobiographical, hanging out with dryads,

Once in his ascent Randolph crossed a rushing stream whose falls a little way off sang runic incantations to the lurking fauns and aegipans and dryads. 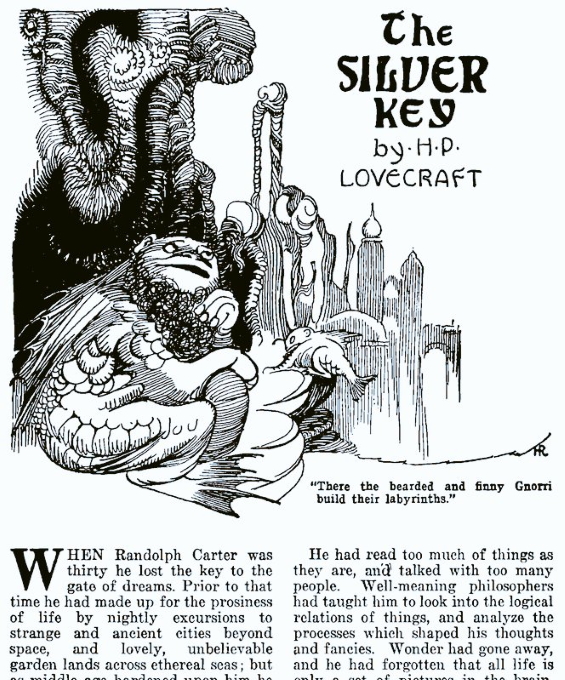