The SFFaudio Podcast #585 – Jesse, Paul Weimer, Marissa Vu, and Evan Lampe talk about The King Of The Elves by Philip K. Dick

Talked about on today’s show:
Beyond Fantasy Fiction, September 1953, Jerome Bixby, Robert Bloch, John Wyndham, Isaac Asimov, Margaret St. Clair, Upon The Dull Earth, a sister magazine to Galaxy, a mirror universe to Astounding and their fantasy magazine: Unknown, 2017, a popular story, a rural fantasist, Expendable, the war against the ants, what makes that a fantasy, the birds can also talk, a psychology story, The Cosmic Puppets, spiders, The Hanging Stranger, pure horror, The Father Thing, a mental illness story, king of the trolls, a tragedy, he kills his best friend, a similar scene, an Invasion Of The Body Snatchers story, the stories being circular, the most horrific thing imaginable, maybe its an ad, every hand is against him, a metaphor for communism taking over, not believing in the Red Scare, the parallel, none of the elves have names, brought in and taken away on litters, the title works the same way, there are two hanging strangers and two kings of the elves, Philip K. Dick doesn’t start with “I’m going to write for a market”, working out ideas over space of thirty pages, compelled to do these things, exploding with ideas, this is my attempt to explore, exploring the psychology of other people and animals, Shadrach Jones, Irish names, Welsh names, Phineas Judd, Dan Green, a Colorado setting, Philip K. Dick was the king of the elves, a town full of men, no females in the story, how do the elves replicate?, binary fission?, The Hobbit, Larry Niven, their empire is diminished, the René Auberjonois narration, laughing, the economics of this story, how many people are like this in our world, his skin is dark, is Shadrach black?, the (aborted) Disney adaptation, ultimately deep down this is NOT a happy story at all, hard to find a Disney princess in this story, violating the whole premise, nature stuff, fairies, another layer of analysis, the way people treat Shadrach, I’m king of the elves, Texaco Gas or King Of The Elves Gas, if this was a real thing, a whole different kind of story, about the landscape of Colorado, men who don’t get married go crazy, lonely, set in their ways, an H.P. Lovecraft Dreamlands story done through the Philip K. Dick lens, Lord Dunsany, The Secret Life Of Walter Mitty, a delusion that ends in violence, bloody hands, H.L. Gold wanted a happy ending, a tacked on ending after the pagebreak, H.P. Lovecraft, The Rats In The Walls, the original ending, it was quite a battle wasn’t it, the real ending, the elves are Philip K. Dick’s cats, he’s got a bunch of cats, curled up on the carpet, cultivating this fantasy in his head, enough for one old man, magazines, some of the lore of elves, Ireland, watching for something to come, a strong opening,

IT WAS RAINING and getting dark. Sheets of water blew along the row of pumps at the edge of the filling station; the tree across the highway bent against the wind.

Shadrach Jones stood just inside the doorway of the little building, leaning against an oil drum. The door was open and gusts of rain blew in onto the wood floor.

he lights up a cigar,

“Darn,” he said. “What a night!” Rain buffeted him, wind blew at him. He looked up and down the highway, squinting. There were no cars in sight. He shook his head, locked up the gasoline pumps.

why is he tensing?, an epileptic fit, water running, white noise, patterns and shapes to be found, the information being generated, the reason he’s locked the door, anticipation as projection, how seeing works, philosophy, one is a pyramid and one is ball, seeing with hands vs. seeing with eyes, two tiny figures in the rain, limp and sodden, they might have worn brightly covered clothes, their swords are gold, dressed in gray, I’m the king of the elves and I’m wet, where the audience laughs, “forlornly, silently”, the Philip K. Dick trademark: a description and then two adverbs, we don’t notice how well written it is, glittering brightly, “honked thinly, impatiently”, “silently, grimly”, clients is the word we’re looking for, don’t use OVERUSE adverbs, Elmore Leonard’s style, said is transparent, its amazing, advice to stop amateur writers from overusing, its not about filling pages, isn’t this novel -> oh my god what am I reading?, sad mental illness, I Am Legend by Richard Matheson, the town and the time, a few days pass, he’s doing it for attention, he doesn’t think much of it, cars might come, quotidian concerns, spending time with mentally ill people, not actual, it throws you out, a boy who exhales carbon monoxide, monkey on a skateboard, his friend Phineas, come in for a coffee, go home and have a hot bath, why did this relationship sour so?, talking him down, how his ears and face and hands looked, back to perception, the change comes slowly (dementia), heavy and brutal, yellow and coarse like parchment, back to Evan’s hometown, seeing them differently for a moment, an actual psychological phenomenon, he sees them at night, they sleep in his bed, a solemn circle, a Philip K. Dick sentence, is the dead body still upstairs?, when you’re in a dream, generating library books, delusions are beliefs about the reality of the world, reality fills in better than brains can, building details are returnable to, not enough lore, nameless elf soldiers, a nameless elf king, the faces of the elf soldiers were serious and concerned, democracy, as our old king lay dying, very Philip K. Dick, important all right, he spoke the name, they don’t know his name, cats turning up and adopting a human, cats lording it over, Sugar Ridge, Route 20, the Endless Road, world building is not the issue, its a spontaneous delusion hinting itself into existence, the walk home and the rain, “I’m wet”, a super sad story, Star Trek: Deep Space Nine, Pop Richey, half name and half description, Lucky story, everybody is a leprechaun, a lot of hands in this story, great murderous shovel hands, shovel nails, above the filling station the sun shone high, Ford truck, a flivver later, what did you say, slender deft fingers, a giant earlobed horror, a faceless creature to be destroyed, level boss, if you’re going to kill somebody you don’t want to know their name, the transformation,

He restored his glasses to his nose and smoothed what remained of his hair into place.

his friendly neighbour, when the Moon sets, warming up, what festering resentment suddenly came forth, the insanity defense, a barrel stave, who had motive here?, there’s no motive here, black people being oppressed by white people in the United States, both of them had stones laid in front of their homes, the flat stone steps, unhappy and cold (just like him), the first of the flat stone steps, the old oak tree,

Shadrach went on up the steps, his lips pressed tight. When he reached the top of the stone steps, the last rays of sunlight had already faded. It was night.

the next time we see stones, his chest rose and fell painfully, reasons for shaking your head, the tacked on ending, his gas station vs. his home, so much about the landscape (and weather), near some trees, the Disney stuff, the isolation, the environment, the wind, the rain, out of the basement, the garage, The Builder, a PTSD story, Noah’s insane, the economics of this all, the interstate system, Robert Moses, destroying a community, thinking about the suburbs, the automobile, the changing landscape of America, Radiator Springs in Cars (2006), the Bates Motel, The Commuter, commentary on suburban sprawls, dark bent over things, a flood of dark creatures, the colour of Phineas’ skin, Shadrach In The Furnace by Robert Silverberg, Dying Inside, spending time with Philip K. Dick short stories is super rewarding, some of his novels are TRIUMPHS, short stories as polished gems of gorgeousness, the psychology of a man in his time, Puttering About In A Small Land, in the book of Daniel, three Jewish boys who refused to bow down, King Nebuchadnezzar, slightly different than our story here, Daniel’s wild, there’s no such thing as a false prophet, no boobs in this story, the Moon and the bleak sky, more coffee, a cup of hot chocolate, this coffee sure tastes good, human kipple, the leftovers of those who are not moving on to the west. 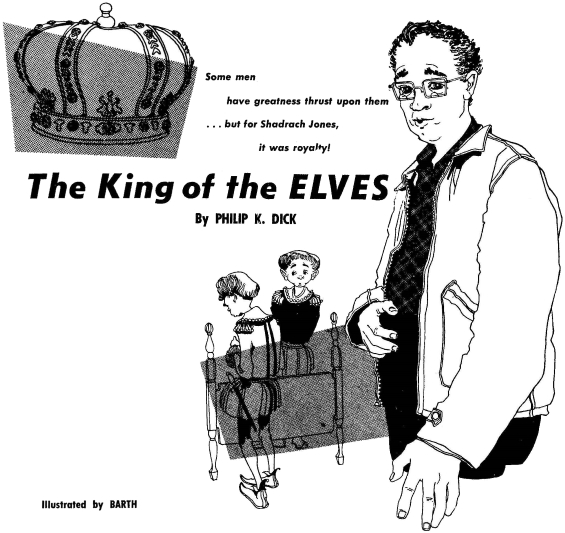 4 thoughts to “The SFFaudio Podcast #585 – READALONG: The King Of The Elves by Philip K. Dick”