Talked about on today’s show:
1838, Poe’s only completed novel, Paul’s Poe years, The Tell-Tale Heart, a macabre sort of phase, Deus Irae by Philip K. Dick and Roger Zelazny, fix-ups, Premature Burial, Ms. Found In A Bottle, The Oblong Box, The Gold Bug, secret codes, Poe is old and public domain and not particularly racist, The Pit And The Pendulum, the Poe theme, the death of a beautiful woman is conspicuous by her absence, the meta-commentary, Tristram Shandy, The Cask Of Amontillado, a dog named Tyger (burning bright?), William Blake, Jules Verne, An Antarctic Mystery, Ms. Found In A Copper Cylinder, Antarctica, “Ms. Found In A…”, “it was begun to have been serialized”, fake stories as true stories, Captain Cook’s Antarctic expeditions, “a labyrinth of lumber”, how to load a ship, Moby Dick by Herman Melville, Washington Irving, SF as a generally American phenomenon, a slow creep of fantastic elements, full-blown surrealism, the drinking, on the Grampus, dressing like a ghost, another phantom in white, “Mr. Pym is not available”, a genuine narrative, missing islands, a metaphor for alcoholism, sailing in a storm, half-sunk/drunk, echoes, the plague ship, the Penguin, echoes, all these lies, a note from the Wikipedia entry, fictional analogues for real events, autobiographical drinking, The Lighthouse by Edgar Allan Poe (a fragment), “I expected to inherit some money”, money problems, “he’s pouring his troubles into this manuscript”, this is Poe’s version of Dude, Where’s My Car?, an unreliable narrator, an excellent story, Samuel Taylor Coleridge’s The Rime Of The Ancient Mariner, albatrosses, thematic similarities, they eat many birds, “an unmentionable thought”, subsequent cannibalism, the same ghost ship as in Rime?, Antarctic spirits, H.P. Lovecraft, the subtitle:

Comprising the Details of Mutiny and Atrocious Butchery on Board the American Brig Grampus, on Her Way to the South Seas, in the Month of June, 1827. With an Account of the Recapture of the Vessel by the Survivers; Their Shipwreck and Subsequent Horrible Sufferings from Famine; Their Deliverance by Means of the British Schooner Jane Guy; the Brief Cruise of this Latter Vessel in the Atlantic Ocean; Her Capture, and the Massacre of Her Crew Among a Group of Islands in the Eighty-Fourth Parallel of Southern Latitude; Together with the Incredible Adventures and Discoveries Still Farther South to Which That Distressing Calamity Gave Rise.

who wrote the subtitle?, they didn’t have the concept of spoilers, the opposite of a spoiler, The Savage Land (Marvel Universe), Edgar Rice Burroughs’ The Land That Time Forgot, a hollow earth theory, this is a Science Fiction book in a strange sense, what’s with the multi-layered coloured water?, the strange creatures, the creature’s corpse in the white waters, is Australia a place?, At The Mountains Of Madness, why Poe is not in outer space, basically these Antarctic people are aliens, this is very Stanley G. Weinbaum (A Martian Odyssey), Michael Moorcock’s Seas Of Fate, H. Rider Haggard, duplicitous natives in the black land, what will be in the white lands?, a heavily read book (in the 19th century), The House Of The Seven Gables by Nathaniel Hawthorne, when Lovecraft describes it…, haunted by the architecture of homes, Lovecraft’s description of Pym:

“In the Narrative of A. Gordon Pym the voyagers reach first a strange south polar land of murderous savages where nothing is white and where vast rocky ravines have the form of titanic Egyptian letters spelling terrible primal arcana of earth; and thereafter a still more mysterious realm where everything is white, and where shrouded giants and snowy-plumed birds guard a cryptic cataract of mist which empties from immeasurable celestial heights into a torrid milky sea.”

pouring into the hollow Earth?, Journey To The Center Of The Earth, At The Earth’s Core, Kublah Khan by Samuel Taylor Coleridge, leaving the ending open to the reader, how will he get back to Nantucket?, the names A. Gordon Pym and E. Allan Poe, framing devices, The Turn Of The Screw, a framing device gives the reader an extra distance, The Secret Sharer by Joseph Conrad, Robert Silverberg’s The Secret Sharer, the southern polar bear, “Tekeli-li, tekeli-li.” the face of an open book, downy feathers, what does it mean?, whiteness, philological scrutiny, “white-phobic”, the audiobook narration, copyright, a total Poe thing to do, Poe loved cryptography, Poe would be writing in Elvish, a font nerd, hanging out with Charles Stross and Alan Moore, can you imagine Poe at a Worldcon?, a drunkard’s story, shoplifting at The Innsmouth Bookshop, Fungi From Yuggoth XV: Antarktos:

Deep in my dream the great bird whispered queerly
Of the black cone amid the polar waste;
Pushing above the ice-sheet lone and drearly,
By storm-crazed aeons battered and defaced.
Hither no living earth-shapes take their courses,
And only pale auroras and faint suns
Glow on that pitted rock, whose primal sources
Are guessed at dimly by the Elder Ones.

the black cone, the primal sources, Lovecraft quoting himself, that shrouded white figure, “Tekeli-li don’t kill the albatross”, Lemuria, Thule, the novel as a journey, how do you return from the surreal?, what happened to Tyger?, they ate him!, Dirk Peters (so manly he has two penises), Tyger’s collar, someone was going to drown the dog, poor Tyger, a horrendously awful horrifying experience, when Paul Theroux visited Jorge Luis Borges he read him The Narrative Of Arthur Gordon Pym Of Nantucket, Borges thought Pym was Poe’s greatest work, the interest in the meta, strange runes, Lovecraft was a teetotaler, deep into madness (not drunken madness), genetic disease or confronting reality, The Call of Cthulhu, dreams, a fever dream?, forgetting, a change in tenses, the missing two or three final chapters, Xeno’s paradox, a Mercator map, and Greenland, is that all racism?, “a nautical negro”, Toni Morrison, the black cook, don’t go into a tiny box-canyon with natives of any colour, scrupulously honest, earlier bushwhacked voyagers, going piratical?, going whaling?, the mutiny, Mr. Starbuck, why is Pym stowing away in the first place?, the captain that ran them down was drunk, boating skills, Treasure Island, Augustus’ father, the inexplicable weevils, “taking liberally from the spirits”, this narrative is full of holes, a free sea voyage, Pym is a teenager, everybody has a boat on Nantucket, an adventure of a lifetime, Pym is “not available”, Jeremiah N. Reynolds, Poe’s last word was “Reynolds”, a possibly apocryphal story, Mocha Dick, the long conversation of conversation of Science Fiction, Moby Dick is in dialogue with Pym and Mocha Dick, bibliographic archaeology, The Island Of Doctor Moreau by H.G. Wells, in a dinghy, considering cannibalism, drawing straws, “and dropped like stones”, did their bones dropped likes stones?, the narrator becomes more and more unreliable, dis-masted, a teetotaler who drinks only coffee. 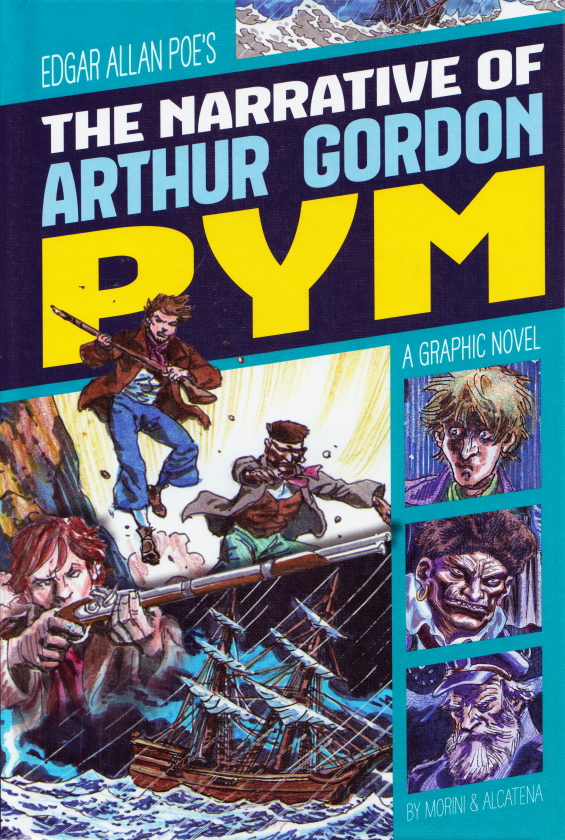 One thought to “The SFFaudio Podcast #303 – READALONG: The Narrative Of Arthur Gordon Pym Of Nantucket by Edgar Allan Poe”